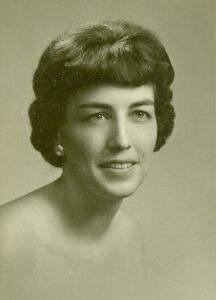 Marilyn J. Bartsch, age 83, of Middleton, passed away on Friday, July 5, 2013, at Agrace HospiceCare.
She was born on March 11, 1930, in South Bend, Ind., the daughter of George and Olive Schroeder Dodson. Marilyn graduated from Plymouth High School in 1948. Marilyn served in the U.S. Naval Reserves for 12 years, it was there she met her husband, Harvey Bartsch Jr. She married Harvey L. Bartsch Jr., on Feb. 6, 1963. She worked for the Associated Loan Company in South Bend and Chicago, the State Medical Society, WPS and the University of Wisconsin-Madison from 1953 until retirement in 1996. She then worked for 7 years at the House of Clay and 5 years at Patrick’s Irish Shop in Hilldale.
Marilyn was past president of the University Women’s Club. She was captain of a bowling team, taking the Badger Vending women’s bowling team to several State Tournaments. She also raced snowmobiles, winning numerous awards and trophies in Marathon and Vilas Counties, she sailed boats and ice boats on Lake Mendota. She made many ceramic painted pieces and won numerous awards for her exquisite ceramics. She was the King Pin at Hi-Point Lodge, Boulder Junction (Musky Capital) for 50 plus years. Marilyn spent many days at the airport, cleaning family airplanes. She enjoyed living in Middleton on Lake Mendota for 50 years.
Survivors include her husband, Harvey; son, Harvey III (Maria); three grandchildren; a great-grandchild; brothers, Dale Dodson and Ronald (Lynn) Dodson; and sisters, Janice Dodson, Margaret Roahrig and Rita Dodson; sisters-in-law, Betty Dodson Stephenson and Connie (Glen) Dodson. Marilyn is preceded in death by her parents; and her brothers, Robert, Keith, Edwin, Walter and Glen.
A visitation will be held from 4-7 p.m. CDT at JOYCE-RYAN FUNERAL HOME, 5701 Odana Road, Madison, on Wednesday July 10, 2013.
A funeral service will be held on Friday, July 12, 2012, at 11 a.m. EDT, at NEW OAK HILL CEMETERY CHAPEL, in Plymouth, Ind. with Rev. Ed Friberg officiating. Visitation will be held from 10 a.m. until the time of service at the chapel. Military honors will be accorded her by members of the American Legion Post 27, Veterans of Foreign Wars – Marshall County Post 1162 and the D.A.V. Burial will follow in the New Oakhill Cemetery.