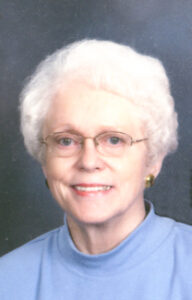 Marilyn Sue Baldridge Stewart, 80, a resident of 13154 Nutmeg Trail, Plymouth, passed away on Tuesday August 21, 2012 at 10:32 a.m. in Miller’s Merry Manor Nursing Home, Plymouth.
She was born in Bloomington, Indiana on January 3, 1932, the daughter of Otho D. and Anna A. (Foster) Baldridge.
Marilyn graduated from University High School on May 26, 1950, she then attended Indiana University, where she was a member of the Alpha Chi Omega Sorority.
On November 24, 1957 she took Keith Stewart to be her husband, in the First United Methodist Church, Bloomington. The couple moved to Plymouth in 1970 from New Market, Indiana and now holds membership in the First United Methodist Church, Plymouth.
Marilyn enjoyed painting, folk art, sewing, crafting, baking, reading, and sitting down for a fun game of bridge. She is a former member of Tri-Kappa.
Surviving are her husband, Keith Stewart of Plymouth; a sister, Rita Hudelson, Bloomington, Indiana; children, Nancy L. and husband Terry Mull of Dayton, Ohio, Elizabeth A. and husband Dean Morris of Warsaw, Indiana and a son, Douglas K. Stewart of Plymouth along with two grandchildren; Cameron and Kyle Morris.
A time of sharing with the family will be held on Saturday, August 25th from 11 a.m. until noon in the First United Methodist, 400 N. Michigan St. Plymouth.
Interment will be in the New Oakhill Cemetery, Plymouth.
They Stewart Family would like to acknowledge the attentive care of the Miller’s Merry Manor staff.
Memorial gifts may be given to The Center for Hospice Care, 112 S. Center St., Plymouth, IN 46563 or the Alzheimer’s Services of Northern Indiana, 922 E. Colfax Avenue, South Bend, IN 46617.