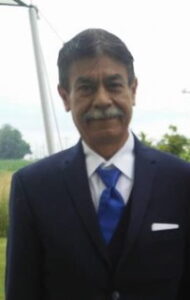 Mario Romero, 64, of Bourbon, passed away on January 09, 2020 at the hospice house in South Bend, IN. Born in Guatemala on April 28, 1955 to Guillermo and Adela (Molina) Romero. He joined brother Juan Luis, and was later joined by siblings, Miguel, Felipe, Silvia, Marielena, and Guillermo. He grew up in Guatemala and came to the United States as a young adult, meeting his soon to be bride Bonnie Lou Clemons in the late 70â€™s. They were married at the courthouse in Plymouth on May 29, 1982. Sadly Bonnie passed away on March 04, 1988.
Mario was an amazing man that loved his family dearly. The most important thing in life to him was his family. He was the family go to man, always there for any and every one. Always up for camping or fishing, Mario was also the one to watch grill. He became an ordained minister in 2016 for the honor of marrying his daughter.
He is survived by his children; Adela (Juan Calderon) Romero of Bourbon, IN, Veronica (Richard) LaFrance of Pacific, MO, Carolyn Hensley of Petersburg, TN, and Jackie (Scott) Stiles of Cornersville, TN; siblings Miguel Romero of Rialto, CA; Felipe Romero of Guatemala, Silvia Romero of Guatemala, Sister Marielena Romero of Guatemala, and Guillermo Romero of California; thirteen grandchildren and seven great-grandchildren. He was preceded in death by his parents, Guillermo and Adela, wife Bonnie, brother Juan Luis, daughter Amanda Griffith, in-laws Arthur and Wanda Clemons and brother-in-law Ernie Clemons.
A graveside service will be done at Eagle Creek Cemetery which is on the northwest corner of CR 25N and 700E Knox, Starke County, Indiana on Monday, January 13, 2020 at 1 P.M. EST with Pastor Ron Hensley sharing words of comfort. In lieu of flowers the family requests you also join them in storytelling and sharing of memories at the Church of Jesus Christ 208 W Marshall St Argos, IN 46501 on Monday, January 13, 2020 at 5 p.m., please bring a dish to pass and a story to share.