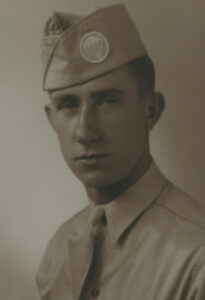 Marion J. Grodowski, 91, a resident of 10B Road in Plymouth since 1935 has died of natural causes. His death occurred at 9:45 p.m. on Tuesday, January 31, 2012 in the St. Joseph Regional Medical Center – Plymouth Campus.
Marion was born in Krakow, Poland, on December 28, 1920. He was the only child of Felix and Mary (Dej) Grodowski. At the age of two the family made their way to the United States and settled in Chicago. With many others during the Depression they lost everything and in 1935 they had saved enough money to purchase a small farm in rural Marshall County and from there made Plymouth their home.
Marion had attended Catholic Schools in Chicago and completed his education as a young enlisted man in the United States Army. A humble man, he was simply proud to have served the Country that had embraced him and his family. He was a member of the distinguished 101st Airborne Unit during WWII as a paratrooper arriving in Normandy by air. During his tour of duty he completed 43 mission jumps, being wounded in the air on three occasions. In Holland his entire squad was killed but him, ending his duty in Austria. As a Sergeant he was decorated with 4 Bronze Stars and a Purple Heart.
His career post Army began with Studebaker in South Bend. He then worked in the paint department at Fisher Body in Lansing for a long time and retired from maintenance engineering at the Culver Academies.
He was a member of St. Michael Roman Catholic Church in Plymouth.
Marion loved flying and piloted his own plane with a grass runway on the farm for many years.
Surviving is a great niece and nephew’s family; Ewa M. and Tadeusz Zamarlik of Lombard, IL and their children, Monika and Dominik. Marion was a regular with the Plymouth McDonald’s breakfast group and enjoyed their camaraderie along with keeping in touch with remaining Army buddies. Visitation will be held on Saturday, February 4, 2012 from 10 a.m. until 11:30 a.m. in the Johnson-Danielson Funeral Home, 1100 N. Michigan St., Plymouth. A Mass of Christian Burial will be held at Noon on Saturday in St. Michael Catholic Church, 613 N. Center St. Plymouth. The Rev. Fr. William Kummer will officiate.
Burial will follow with military honors provided by members of the Plymouth American Legion Post 27, Veterans of Foreign Wars – Marshall County Post 1162 and the D.A.V. at the Oakhill Cemetery, Plymouth.
Memorial gifts may be given to Disabled American Veterans, c/o 4632 Queen Road, Plymouth, IN 46563