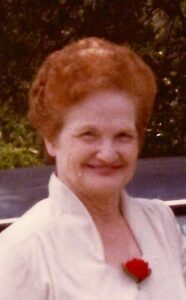 Marion Lavon (Snyder) Rude, age 89, died at Fawcett Memorial Hospital in Port Charlotte, Florida, on her birthday ~ Saturday, March 7, 2015 ~ of natural causes. She was born in Elkhart, Indiana on March 7, 1926, the daughter of Warren and Martha (Ball) Snyder. She graduated from Elkhart High School in 1943. Lavon was a long time member of the Good Shepherd Baptist Church. She was preceded in death by her husband Raymond Aldon Rude on March 15, 1996, and her son, John Scott Rude on June 21, 1974 and by two brothers; Warren Robert Snyder and Max Duane Snyder. Marion who also went by “Lavon” or “Red” married Raymond Aldon Rude April 4, 1944 in Elkhart, IN. She is survived by her four sons; Robert Aldon Rude and wife, Cynthia (Lewis) Rude from Walkerton, IN, Donald Ray Rude and wife Irene (Daugherty) Rude from Mineral Bluff, Georgia, Garry Dale Rude and wife Raynette (Parks) Rude from Kingwood, Texas and Randy Dean and his wife Dana Lynn (Douglas) Rude from North Port, Florida.
Surviving are a brother Rev. John Lawrence Snyder from Huntington, IN. and the following grandchildren & great-grandchildren:
Grandchildren are as follows; Bob & Cindy’s sons; Ryan Aldon Rude and wife Kristy and their children; Ethan Robert Rude and Kaylee Ann Rude, from South Lyon, MI , Robert Lewis Rude, and his wife Brittany from LaPorte, IN, Kendra Clingenpeel, Daniel & Marisa Clingenpeel and their son Liam. Don & Irene’s daughter, Heather Meria (Rude) Pope Tammen & husband George Michael Tammen from Blue Ridge, GA and sons; Donald Calloway Pope and Jeremy Blake Tammen, and son Donald Jacob Daugherty and his son Brandon from Albuquerque, NM, Garry Rude & wife Raynette (Parks) Rude from Kingwood, TX and children Michael Eric Rude; his son Michael Enrique Rude, two daughters; Erin Nicole Rude and children; Nathan Keith White & Nevaeh Nicole White, and Garry’s daughter Hayley Noel Rude, Nicolas Parks, Jonathan Parks, Amanda (Parks) Veatch & husband, Dustin, their children; Kennedy Jaycee Veatch and Knox Joe Ray Veatch, from Kingwood, TX. Randy & Dana (Douglas) Rude and two children; Matthew Scott Rude from North Port, FL and Jessica D’anda Rude from Victorville, California, and her children; Jordan, Jayden, Sophia & Mason.
Lavon was a loving wife, mother and grandmother. She enjoyed bowling, playing cards and gardening in her younger years. She also loved to cook for her family. We all have memories of some of her signature dishes. She continued to solve word puzzles and crosswords which kept her mind sharp as a tack until the end of her life.
Lavon was a long time member of the Women’s Moose in Plymouth, IN, where she reached College of Regents which is based on merit. This prestigious personal honor rewards Past Regents for their outstanding accomplishments and services rendered on behalf of children and seniors. Lavon and her husband Al raised most of their children in Plymouth, Indiana. After that they moved to Lorena, Texas, Midland, Texas, Salisbury, North Carolina, Houston, Texas, Dixon, California, Moreno Valley, California and then Port Charlotte, Florida. Al spent a few years working in Saudi, Arabia, but Lavon stayed in the states during that time. Lavon worked at the Old Barrel Restaurant, McCords and Kmart and a few other places, but she will be especially remembered for providing childcare to many children. Quite a few of the children she cared for stayed in touch long after they were grown. There will be a memorial service held in the Chapel of New Oakhill Cemetery on Monday, June 22nd, 2015. The visitation will be at 10:00 a.m., a service will be performed by Pastor Brian Baughman of Koontz Lake Missionary Church at 11:00 a.m. In lieu of flowers, memorial donations may be made to the American Heart Association 6100 W 96th St Ste 200, Indianapolis, IN 46278 or the American Cancer Association, PO Box 22718 Oklahoma City, Oklahoma, 73123-1718.