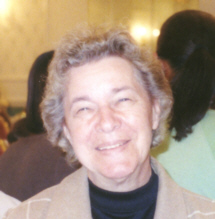 Marjorie E. Richards a longtime Donaldson area resident, world wide friend and civic volunteer has died following a brief and unexpected illness at the age of 75. Marjorie passed in the care of the St. Joseph Regional Medical Center, Plymouth at 6:10 P.M. Wednesday August 23rd.
Marjorie entered this life on January 17, 1931 in Bloomington, Illinois as the daughter of Charles Edward and Elsie Virginia (Whitmer) Stoddard. She received her education and graduated from Bloomington High School with the Class of 1948.
Follow graduation she met Robert C. Richards Sr. and they would marry January 21, 1949 in Bloomington. She worked as a secretary for State Farm Insurance. The family moved to the Hamlet area and then to Donaldson in 1961. There she settled into running the household as a wife and mother of three sons; all the while assisting as the bookkeeper for the family trucking business and sawmill operating yet today.
Marjorie had a passion for gardening and was a proud member of the Master Gardeners Club, having served as a Past President and writing the club newsletter. Her appreciation for nature and its habitats led her to serve the Audubon Society for years counting the Donaldson bird population.
Her organizational skills have given her the title of family historian, having created numerous scrapbooks and photo albums through the years. She was always the one behind the camera at family outings and events. Marjorie also enjoyed reading and has collected an extensive library in her home.
She was a longtime member of the Meadow Larks Home Economics club and will be greatly missed for her efforts.
Marjorie was not to be left behind in the age of technology. She spent a great deal of her past time on the computer e-mailing with a vast number of friends and family as far away as Scotland. To many her greatest gift to them was lending a sympathetic ear and her many words of encouragement.
Left to cherish her memory is her devoted husband of 57 years, Robert Sr., three sons; Robert C. Jr. and spouse Barbara of Plymouth, Jerry A. Richards of Donaldson and John C. and spouse Lee Ann of Blowing Rock, N.C. along with grandchildren Rob Richards III, Glenn Goss, Brian Goss, Nikki Kennedy, Jerry Richards Jr., Brittany Richards, John Ryan Richards, Michael C. Richards and David Chance Richards. Nine great grandchildren, two brothers; Arthur and Robert Stoddard and a sister Doris Cropp also survive with several nieces and nephews.
Marjorie was preceded in death by her parents and two sisters; Evelyn Center and Virginia McMillin.
The family will receive friends at the Johnson-Danielson Funeral Home, 1100 N. Michigan St. on Sunday, August 27th from Noon until 2 p.m. where services will be held following visitation at 2 p.m. with her pastor Vernon Hargrove of the United Church of God of which she was a devoted member officiating.
Memorial gifts in Marjorie’s memory may be made to the Charity of the Donor’s Choice.