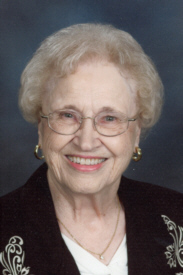 Marjorie Padgett Houghton, 96, of Plymouth, passed away on Friday, September 16, 2016 at George Ade Nursing Home in Brook, Indiana.
Marjorie was born on March 8, 1920 in Brook, Indiana to Harley A. and Winnie P. (Risley) Padgett. She grew up on the family farm in Newton County, graduating from Brook High School in 1938. She attended Franklin College in Franklin, Indiana to pursue her goal of becoming a teacher. When the teaching program there closed, Marjorie transferred to Ball State Teachers College where her degree in elementary education was conferred in 1942. She was a member of Delta Zeta national sorority during her college years. Then in the midst of family life and teaching she was able to attain her master’s degree from the University of Notre Dame.
Marjorie married Thomas E. Houghton in her parents’ living room on the farm on a chilly New Year’s Eve, 1945, honeymooning in New York City. Through their entire 48 years of marriage they remained devoted to each other, raised a family of three sons and held an open door to their sons’ many friends to whom they were great role models. She was a beloved teacher to many throughout her years at Washington Elementary School in Plymouth, where she taught kindergarten for 31 years and fourth grade for three. She was a long-time member of the Evangelical United Brethren church in Plymouth, and since 1973 was an active member of First United Methodist Church of Plymouth. Marjorie was a 50 year member of the Order of the Eastern Star and for many years of the Tri Kappa â€“ Beta Delta Chapter, a philanthropic sorority in Plymouth, in both the active and alumni chapters. A gracious hostess, she was known for her lovely dinners and excellent culinary skills. Marjorie is survived by three sons, Thomas E. Houghton Jr. of Plymouth, Harley E. (Christine) Houghton of Rensselaer, Indiana, and Steven K. (Terry) Houghton of Noblesville, Indiana. She was a loving grandmother to her seven grandchildren, Travis (Florecita) Houghton, Courtney (Grant) Canfield, Stephanie Houghton, Alyse Houghton, Ashley (Josh) Salazar, Lindsey (Mark Lauer) Houghton, Trent (Jordan) Houghton, and Britt Houghton; and to her two great-grandchildren, Tulivia Houghton and Edie Canfield. She was preceded in death by her husband, Tom, in 1993. Also surviving are her much loved sister and brother, Greta (Roy) Otte of Columbus, Indiana, and Venis (Lois) Padgett of Brook, along with five nieces and nephews and their children and grandchildren. Visitation will be held from 4:00 – 8:00 p.m. EDT on Thursday, September 22nd in the Johnson-Danielson Funeral Home, 1100 N. Michigan St, Plymouth. A Tri Kappa Memorial Rite will take place at 7:30 p.m. Thursday in the funeral home.
Funeral services will be at 11:00 a.m. EDT on Friday, September 23 at First United Methodist Church, 400 N. Michigan Street, Plymouth where visitation will continue after 10 a.m. The Rev. Toni Carmer, pastor will officiate. Final resting place will be alongside her husband at the New Oak Hill Cemetery Mausoleum, Plymouth. Preferred are memorial gifts to the First United Methodist Church – Organ Fund.