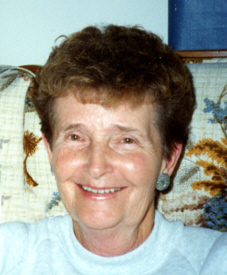 Marjorie J. Struble, 89, formerly of Tyner and the Meyer’s Lake area, passed away at 12:35 a.m. on Friday, January 2, 2015 at the Signature Healthcare of Bremen.
Born in South Bend, Indiana on July 14, 1925, Marjorie was the daughter of Francis O. and Marie (Van Riper) Smith.
On July 12, 1945 Marjorie married Fred E. Struble in Pratt, Kansas before he left with his unit in the Air Force during WWII.
Marjorie worked as a waitress and then began painting for various companies in the area, such as Collins & Co. and Palbekin. She was a lady that was always on the go and the rock in her family. Marjorie was quite the character and loved to make people laugh. She loved going on long car rides with Fred, enjoying nature. She liked fishing and treasured collecting Snow Babies. She sent cards to her dear family and friends for every occasion, and often dropped off homemade desserts to some of her favorite hang-out spots. Marjorie was also a member of the Tyner Rebekah Lodge #865.
She is survived by her loving husband of 69 years, Fred of Plymouth and their three children: Linda Struble of Plymouth, Dennis O. Struble of Bremen and Gary M. and Sue Struble of Lakeville. Her grandchildren are: Brett Burger, Doug and Sara Burger, Mike Lowery, Kameron and Brandy Struble, Kody Lowery, Kole Lowery, Kyle Burger, Alex Burger, Gavin Struble, Lydia Struble and Laelyn Lowery. Her brother, Frank Smith Jr. of Mishawaka, also survives.
Marjorie was preceded in death by her parents and her sister, Marian Henderson.
Visitation will be from 4-8 p.m. on Tuesday, January 6, 2015 in the Johnson-Danielson Funeral Home, 1100 N. Michigan Street, Plymouth. A Rebekah Memorial rite will be held at 7 p.m.
Funeral services will be at 11 a.m. on Wednesday, January 7, 2015 in the Johnson-Danielson Funeral Home, with Rev. Tamara Boggs of Tyner United Methodist Church, officiating.
Burial will be in the Tyner Cemetery.
In lieu of flowers, memorial contributions may be made to the Tyner Rebekah Lodge #865, 18260 4B Road, Walkerton, IN 46574 or to the Humane Society of Marshall Co, P.O. Box 22, Plymouth, IN 46563.