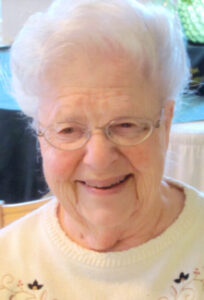 Marjorie L. (Stephey) Cox, 91, U.S. 6, Bremen, Indiana, passed away in Elkhart General Hospital at 4:35 a.m. on Sunday, January 6, 2013. Marjorie fell ill in October after treatment with a tainted drug causing spinal meningitis.
Born in Bremen on April 23, 1921, Marjorie was the daughter of George H. and Myrtle I. (Clindaniel) Stephey.
She graduated from LaPaz High School with the class of 1939.
On November 2, 1941, in Plymouth’s First Presbyterian Church, Marjorie became the bride of E. Wayne Cox.
A devoted wife and mother and loyal member of the First Presbyterian Church, Marjorie found joy in many things and family was always the most important. She enjoyed quilting and cooking for many years and was an avid antique dish collector.
Marjorie is survived by her spouse of 71 years and their two sons and a daughter. They are Larry W. ( Betty) Cox, Payson, AZ, Bruce L. Cox, Sand Lake, WI., and Sherry J. Kibbe, Lafayette, IN.
Nine grandchildren and eight great-grandchildren also survive.
Marjorie was preceded in death by her parents and by brothers; Harold and Donald Stephey.
The family will receive friends on Wednesday, January 9th from 4 – 7 p.m. in the Johnson-Danielson Funeral Home, 1100 North Michigan Street, Plymouth. Funeral services with calling one hour prior, will be held at 11 a.m. Thursday, January 10th in the First Presbyterian Church, 401 North Walnut Street, Plymouth. Pastor Jean Sparks and Marjorie’s nephew Rev. Stephen Cox of the Cornerstone Community Fellowship will officiate.
Burial will follow services in the Bremen Cemetery.
Memorials in Marjorie’s memory may be made to the Center for Hospice Care 112 S. Center St., Plymouth, IN 46563.