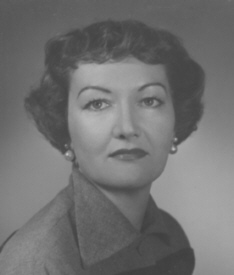 Marjorie M. Morcombe, a resident of Miller’s Merry Manor since July of 2004, died there of natural causes at 1:15 a.m. on Monday, October 16, 2006.
Called “Mrs. Republican,” by her friends, Marjorie, a strikingly beautiful woman, intelligent and witty, was 98-years-old.
Standing 5 feet 8, with blonde hair and blue eyes, Marjorie carried herself as the model she once was.
Born in Martin’s Ferry, Ohio, on March 1, 1908, she was the daughter of Frank S. and Mary T. Copenhaver Morrison.
She wanted to be a teacher. It took five colleges in three states for her to reach her goal.
In this –as in many things—she would not be deterred. She started at Western College for Women, Oxford, Ohio, returning home in her sophomore year when her father became ill. Later she transferred to the University of West Virginia. A year at Akron University, another at Ohio State and a final year, 33 years later, when she earned a degree from Saint Mary’s College, South Bend.
She had begun her modeling career in Ohio in order to help with her college expenses. While in West Virginia, she met her first husband, Daniel James Brady. They married on August 30, 1929, in Summit County, Ohio. Together, they traveled a great deal. Dan was Sales Promotional Manager of the Western Division of General Motors.
It was during this period that Marjorie was asked to take a screen test. She turned it down because she didn’t like the lifestyle of the movie people. She also declined to be a showgirl in the Follies of the Radio City Music Hall on Broadway in New York City. For the same reasons.
In San Francisco, she resumed modeling. When her marriage ended, Marjorie returned to the Midwest and, during WW II, she worked in Akron at Goodyear Aircraft as a Billing Specification specialist. Later, she was a fashion coordinator and buyer in Polsky’s department store in Akron, Ohio and also trained models and staged fashion shows.
Daniel Brady, Sr. died in 1978.
In 1946, she met her second husband, Boyd W. Morcombe, a widower, who owned an automobile dealership in Cleveland. They were married on July 2, 1949, in Akron, Ohio. Three years later, in 1952, bought a Buick dealership in Plymouth.
Marjorie continued her education, graduating from Saint Mary’s in 1959. She earned a teaching license in languages: Spanish, French and English. In the summer she attended the Universidad of Interamericana in Satillo, Mexico, polishing her Spanish and earning credits toward a Master’s Degree.
In 1959, she was hired by LaPaz High School to set up their foreign language department and in 1960, she came to Plymouth High School to plan their modern language program. She retired from teaching English and Spanish at PHS in 1973, when her husband’s health began to worsen. He died in 1979, from a heart attack.
In retirement, Marjorie had been a substitute teacher. She taught chemistry, math, English, French and Spanish.
She loved to read. She enjoyed shopping and going to the movies, sometimes seeing two films a day with her good friend, Mary Anne France.
She was a world traveler, having been to Europe twice.
She belonged to the Daughters of the American Revolution’s Tippecanoe River Wythougan chapter for more than 40 years and was co-chair of the Good Citizen Contest. She also served as Treasurer for the Marshall County Women’s Republican Club for over a decade.
She loved politics and this time of year the lawn of her home on South Michigan Street blossomed with candidate signs.
She belonged to the A.A.U.W., the Modern Language Association of America: the Indiana Classroom Teachers: the Indiana State Teachers Association and the Indiana Teachers of Modern Languages.
Marjorie was a Civil War buff, with divided family loyalties; her mother was a Rebel and her dad, a Yankee.
A Christian Scientist, she attended the Church of Christ Scientist in Warsaw and had served as a Second Reader.
Marjorie is survived by a daughter-in-law, Pat Burgan, Cuyahoga Falls, Ohio. Three grandchildren: Debi Brady, Phoenix, Arizona, Daniel J. Brady, III, Cuyahoga Falls, Ohio, and Dennis J. Brady, Cuyahoga Falls, Ohio, also survive, together with three step-grandchildren: Nancy A. and Brian K. McCallen and Kris L. and Robin Morcombe, all of Plymouth and Jeff M. and Charlene Morcombe, Waterford, Wisconsin.
A special niece, Anne and Lisle Kendall and their son, Scott, of Torrance, California, and 17 great-grandchildren survive as well.
She was preceded in death by her parents and her husbands, Daniel J. Brady Sr., and Boyd W. Morcombe, Sr., a son, four brothers; Paul, Harry, Sandford and Frank and a sister Adaline.
She said, in an interview on her 90th birthday, that when her only child, Daniel J. Brady, Jr., died at the age of 34, “ it was the worst tragedy to ever happen in my life.” Two step-sons and a step-daughter also died before her: Boyd W. Morcombe Jr., Jack Morcombe and Nancy Erich.
Friends are invited to celebrate the long and beautiful life of Marjorie Morcombe with her family from 4 – 8 p.m. Wednesday, October 18, 2006, in the Johnson-Danielson Funeral Home, 1100 N. Michigan St., Plymouth. Visitation will continue after 7 a.m. Thursday, October 19, 2006 until services at 10:30 a.m. in the funeral home. First Reader, William Nichols of the Warsaw Christian Science Church will preside.
Burial in Oakhill Cemetery, Plymouth, will follow.
Memorials in Marjorie Morcombe’s memory may be made to the Plymouth High School Spanish Department.