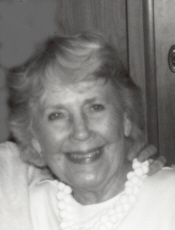 Marjorie Marie Reynolds, 88, a resident of Pretty Lake, Plymouth, Ind., died peacefully in Columbus, Ind., on July 7, 2003, just five months after the death of her beloved husband of 65 years, Ralph W. Reynolds.
Born on September 11, 1914, in Ockley, Ind., near where her father operated a general store, Marjorie was the daughter of Perry Cripe and Clara Ellen Rhodes Cripe. She was one of five children.
She graduated from Lafayette Jefferson High School in Lafayette, Ind. After her marriage to Ralph who was the chief engineer for Holcomb and Hoke, Indianapolis, Ind., she raised her family and served for many years as secretary to the principal of Anna Pearl Hamilton Elementary School #77, Indianapolis.
When Ralph retired in 1978, they moved to their charming and comfortable home on Pretty Lake, just outside of Plymouth.
The couple loved animals and always had a dog. One named “Highway,” because they found her as a stray on the highway, was a favored pet. Marjorie enjoyed walking her around the golf course and the lake. She had gorgeous planters full of flowers in the spring and was admired for her warm, generous personality and sweet smile.
Marjorie is survived by two sons, a daughter and their families. They are William Ralph and Fran Reynolds of Santa Fe, N.M.; Jonathan Peter and Priscilla Reynolds of Columbus, Ind., and Joellen Jane and Peter Lippett of Orinda, Calif. Her grandchildren are Peter Reynolds and David Reynolds both of New York, N.Y.; Alexandra Taylor of Houston, Texas and Victoria Reynolds of Columbus, Ind. Two brothers, Joseph Cripe of Indianapolis and Eugene Cripe of Cottonwood, Ariz., also survive.
Marjorie was preceded in death by her parents, her husband and by a brother, William Cripe of Atlanta, Ga., and a sister, Josephine Riley of Lafayette, La.
Visitation with the family will be held in the Johnson-Danielson Funeral Home, 1100 N. Michigan St., Plymouth, at 1 p.m. on Saturday, July 12, 2003. A memorial service officiated by the Rev. Matt Millot will follow visitation at 2 p.m.
The family requests no flowers, but anyone wishing to make a memorial donation in Marjorie’s name may do so to the charity of their choice or to the Marshall County Neighborhood Center, 402 W. Garro St., Plymouth.