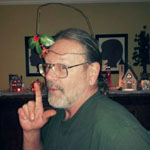 Mark D. Bishop aka..”Big Sexy,” 61, lost his battle in the fight for life at 7:10 a.m. on Wednesday, December 27, 2017.
Born in Plymouth on November 8,1956 Mark was the son of Charles and Mary Jane (Cochran) Bishop. He attended Plymouth High School where he excelled in track and field and shot put. He was also the drummer for a band named “Chance.” Members included Kirk Van Gilder, Dick Siddall, Dave Hamann, and Keith Dyer.
He enjoyed participating in Christmas in April, being known as “Scrounger,” and aiding many in his community through volunteer work of various types. It meant alot to Mark to give of himself to help those in need.
Mark was a skilled laborer, but enjoyed woodworking even more. He built many decks throughout the years for people who were physically handicapped. He also made canes and walking sticks with his daughter; Sara handling the artwork. They were just starting a company “Lean On Me” Custom Canes and Walking Sticks.
Mark enjoyed spending time with his grandchildren most of all! He was fortunate enough to have lived with them and watched them grow. He was a great role model of “what not to do” for his grandchildren. They will miss him joking around and doing things he shouldn’t be doing! And then laughing about it later! Mark was always the life of the party and a forever lover of Led Zeppelin!
He is survived by his daughter, Sara(Mark) Druzbicki and grandchildren: Cassidy Allen, Carter and Chloe Druzbicki; stepdaughter, Jayme Rose; stepson, Shawn McCarty, and siblings: Wayne(Pam) Bishop, Alanna(Larry) Heet, and Steve Bishop.
Mark was preceded in death by his parents. Private services will be held.
Memorial contributions can be made to the family through the funeral home.
“WHEN WE ALL ARE ONE AND ONE IS ALL, TO BE A ROCK AND NOT TO ROLL.” -Led Zeppelin