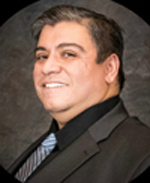 Mark Pisano Larios, 48, passed away on Friday October 19, 2018 at his home in Culver, Indiana. He was born on December 24, 1969 to Mario and Margie Miranda Larios in Los Angeles, California.
He attended Hollywood High School in Hollywood, California and also attended UCLA University.
In 1997 he moved to Indiana and worked for the Xerox Corporation and Eli Lilly. He was currently employed at Hogan Consulting in Chesterton as a systems administrator.
Mark was an avid shooter and gun enthusiast. He also loved playing chess and backgammon.
On October 14, 2017 in Rochester, he was united in marraige to Nichol Ketcham and had just celebrated their first anniversary.
Surviving is his wife, Nichol Larios; of Culver, his mother and father, Mario Larios and Margie Ramariz both of California: and his two children, Aaron Rowe and Natasha Rowe of Knox.
Visitation for Mark will be held on Thursday October 25, 2018 from 3-5:00 P.M. in the Johnson-Danielson Funeral Home 1100 N. Michigan Street, Plymouth, where funeral services will follow at 5:00 P.M. with Life Celebrant Jim Smart officiating. A Funeral Mass will also take place at a later date in Los Angeles, California.