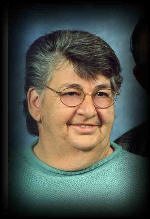 Marlene “Kay” Holem, 60, a lifetime Plymouth resident until her move to Bristol , Ind. , two years ago, died of natural causes at 6:20 a.m. on Thursday, January 30, 2003. Kay died at the home of her daughter and son-in-law. Paige and Chris Martin, 53224 Beech Grove Drive, Bristol. Kay was born on April 30, 1942, in Plymouth, the daughter of Ben Gilley and Viola (Cannan) Gilley Hesgard. She attended Lincoln High School. On June 18, 1958, in Plymouth, she and Jerry Holem were married. She was a mother and a homemaker. She enjoyed cooking, crocheting, knitting, reading, stamping and many different crafts. In the fall of 1996, Kay and Jerry joined MMAP (Mobile Missionary Assistant Program.) They traveled to many different locations to help churches, Christian schools and other Christian organizations with their numerous projects. On these trips, Kay would learn new crafts and would share them with friends and family. The couple stopped traveling in the summer of 2001 when she was diagnosed with colon cancer. Kay was a member of Sunrise Chapel, Plymouth, were in 1990, she took over the Wednesday night meal ministry and became known and celebrated for her delicious cooking. She also taught cooking class once a month for a number of years. She was also ministered to by the pastor and members of the Middlebury Church of the Brethren. She is survived by Jerry, her husband of 44 years and by their two sons and three daughters. Her sons are Wade (Carleigh) Holem, Goshen and Wally (Lotus) Holem, Plymouth . Her daughters are Paige (Chris) Martin, Bristol , Ind. , Christina Holem, Ft. Myers , Florida and Anna (Chris) Newton , Plymouth . Five grandchildren: Tyler and Donovan Newton, Plymouth ; Keegan and Ezri Holem, Goshen and Wally Holem Jr., Plymouth , also survive. Three sisters, Jean Gilbert, Plymouth; Judy McCollough, Bourbon and Danice Harding, Middlebury along with a brother, Richard Belt, Pensacola, Fla., survive as well together with many nieces, nephews and grand nieces and nephews, and even great-great nieces and nephews. Kay was preceded in death by her parents and an infant son, Gregory Trent Holem. Friends may call from 1 to 3 p.m. on Saturday, February 1, 2003, at the Sunrise Chapel, 1802 Lincoln Highway East, Plymouth. Funeral services for Kay will be held following visitation at 3 p.m. in the Chapel. Pastor Rustin Krapfl will officiate. Burial will follow in New Oakhill Cemetery , Plymouth . The Johnson-Danielson Funeral Home, 1100 N. Michigan St. , Plymouth , is assisting with arrangements. Memorial gifts in Kay’s name may be made to the Gideon International Memorial Bible organization.