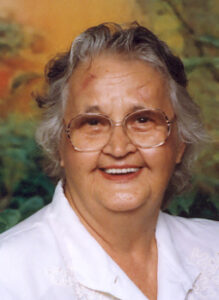 Marsha D. Dennison formerly of Plymouth, died in a vehicular accident on February 3, 2010.
Marsha was born on January 15, 1934 in Bonanza, KY the daughter of Brice and Mae Yates Manuel.
She took Charles H. Dennison as her husband on April 1, 1973 in Navasota, TX. Charles preceded her in death on July 10, 2004.
Marsha worked at the Etna Green Café as a cook, and also worked as a waitress in various locations across the country.
She enjoyed puzzles and collecting ceramic dolls. Marsha always had a positive attitude, she loved people. Another thing she enjoyed was flowers, she had a green thumb.
Marsha was a member of the First Baptist Church in Taylorsville, KY.
She is survived by a daughter H. Regina Alexander, a son Merle A. Heath, eleven grandchildren, twenty eight great grandchildren, and a brother Bucky Manuel.
Marsha was preceded in death by her, husband and parents.
Services will be held at a later date in Graceland Cemetery, Claypool, IN.
Memorial contributions in Marsha’s name may be given to the family.