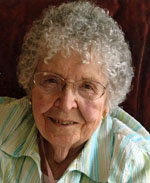 Lifetime Plymouth resident, Martha A. Kruyer Adams, 91, passed away at 6:46 p.m. on Sunday January 7, 2018 at Pilgrim Manor, Plymouth.
Martha was born in Plymouth, Indiana on July 25, 1926 to Lawrence E. and Ethel (Dull) Pierce. She graduated from Plymouth High School with the class of 1944.
On Oct 18, 1952, Martha married Lewis F. â€œSpudâ€ Kruyer. He would precede her in death on March 25, 1986. She would then meet and marry Clifford E. Adams on October 24, 1987. He would also precede her in death on June 10, 2011.
Martha, while having no children of her own, opened her arms and heart to her step-children and grandchildren. She cherished all the memories made with them and the laughs shared. She enjoyed crafts, shopping, reading and many trips to Florida. Martha was a member of St. Michael Catholic Church, the Altar Rosary Society, the VFW Post 1162 Ladies Auxiliary and Harvest House.
Martha is survived by her step-children: Jim (Linda) Adams of Naples, FL, Joe (Pat) Adams of Plymouth, Bill (Jean) Adams of Plymouth, Linda (Jim) Shorter of Plymouth, Barb Bottorff of Chesterton, IN, Kay (Larry) Faulstich of Plymouth, Dale Adams of Greenwich, CT, Brian (Anne) Adams of Indianapolis, Carol (Jeff) Hahn of Chesterton, IN, and Paul (Jenny) Adams of Plainfield, IN; 25 grandchildren and 32 great-grandchildren.
She was proceeded in death by her two husbands, Spud and Cliff, her parents and her brother, Edmond L. Pierce.
Visitation will be held on Friday January 12, 2018 from 10:30-11:30 a.m. at St. Michael Catholic Church, 613 N. Center Street, Plymouth. A Rosary will follow at 11:30 a.m.
Mass of Christian Burial will begin on Friday at 12:00 p.m. at St. Michael Catholic Church, after the Rosary.
Burial will follow in St. Michael Catholic Cemetery.
Memorial contributions can be made to The Cystic Fibrosis Foundation, 8445 Keystone Crossing #135, Indianapolis, IN 46240 or St. Michael Catholic School 612 N. Walnut St., Plymouth, IN 46563.