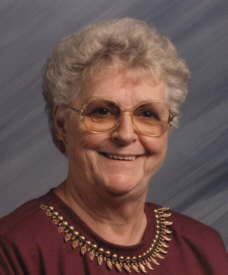 Martha I. Bunton Messman, 87, a Lincoln Highway resident in Plymouth, passed at her home Thursday morning, October 10, 2013.
Born in Walkerton, Indiana on Feberuary 22, 1926, Martha was the daughter of Charles Norman and Laura E. (Barnes) Pointon. She attended Laporte High School.
Martha married Warren A. Bunton on November 16, 1946 in Laporte. The couple moved from Laporte to Plymouth in 1969. Warren would precede her in death on March 21, 1989.
She worked for Hehr International as a production line worker for 17 years before her retirement in 1987.
In Walkerton, Indiana on January 24, 1997, Martha married Willard G. Messman. He preceded her in death on March 20, 2012.
Martha was a member of the Blissville Church of the Brethren in Plymouth. She has a vast bell and ceramic bird collection. Any chance she had, Martha loved being with her family and enjoying the outdoors. She cherished being a mother and getting to do crafts with her grandchildren.
She is survived by her 12 children: David (Diane) Pointon of Plymouth, Laura Arvin of Plymouth, Douglas (Glenna) Bunton of Plymouth, Michael (Marlene) Bunton of Plymouth, Sherry (Kenneth) Lindsey of New Buffalo, MI, Ellen (Earl) Scott of Plymouth, Warren Lee (Carolyn) Bunton of Grovertown, Margaret (Greg) Carroll of Plymouth, Donna Cannon of Nappanee, Ronald (Cara) Bunton of Bremen, Donald (Tina) Bunton of Plymouth, Rose Cook of Plymouth; and 3 step-children: Herbert (Glenda) Messman of Decator, AL, Robert (Nancy) Messman of Texas, and Sherl Carder of Michigan City, IN. She has numerous grandchildren, great-granchildren and great-great-grandchildren.
She was preceded in death by her parents, 6 brothers and 5 sisters.
Visitation will be from 3 – 6 p.m. on Sunday, October 13, 2013 in the Johnson-Danielson Funeral Home, 1100 N. Michigan Street, Plymouth.
Funeral services will be at 11 a.m. on Monday, October 14, 2013 in the Blissville Church of the Brethren, 6250 Spruce Trl., Plymouth, IN 46563, officiated by Pastor Brandon Schodek. Visitation will resume one hour prior to services in the church. Burial will be in the Oakhill Cemetery.
Memorial contributions can be made to the Blissville Church of the Brethren.