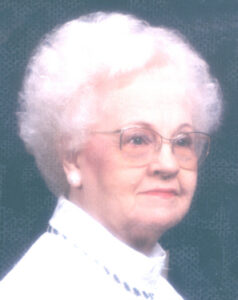 Martha Jane Mann, 87, a resident of Hubbard Hill Estates, Elkhart, Indiana, passed away of natural causes at 9:40 p.m. on Wednesday, November 21, 2012. The daughter of Russell L. and Eva L. McCloud VanVactor, Martha was born in Plymouth, Indiana, on January 18, 1925.
She was a 1943 graduate of Plymouth High School, where she played percussion in the band. She also played the guitar. Upon graduation, she worked for NIPSCO and enjoyed getting together with her former co-workers for many years.
In 1964, Martha and Steve’s father, William, started Mann’s Corvette shop in a garage on their farm. The business is still in existence today in Mishawaka. Martha had worked as a mail and file clerk for Associates, Inc, for 41 years, retiring in 1997. She worked 16 years in Indiana. In 1977 she had the opportunity to move to Texas with Associates where she worked and lived in Hurst, Texas for 25 years. She loved and embraced being a “Texan”.
After returning to Indiana, she was diagnosed with cancer and was a survivor after going through chemo therapy treatments.
She was a former member of the First United Methodist Church in Plymouth, Indiana and the First United Church in Euless, Texas. In recent years, she attended Jamestown United Methodist Church with her son and daughter-in-law.
Martha enjoyed eating out, reading, watching her favorite programs on television and especially being with her family. She was an avid Eucher player while residing at Hubbard Hill.
Surviving are Martha’s son and his wife, Steve and Roberta Mann of Osceola, Indiana, grandsons: Michael Mann and Matthew Mann, great grandchildren: Natalie Mann, Nicole Mann and Nathan Mann, a sister, Ruth H. Kinney of Plymouth, Indiana and several nieces and nephews.
Martha was preceded in death by her parents and a brother, Harold S. VanVactor.
Visitation will be on Tuesday, November 27, 2012 from 5 to 7 p.m. in the Johnson-Danielson Funeral Home, 1100 N. Michigan Street, Plymouth, Indiana.
Funeral services for Martha will be held immediately following visitation at 7:00 p.m. on Tuesday, in the funeral home, with Rev. Paul Rogers officiating.
Interment will be in New Oakhill Cemetery, Plymouth, Indiana.
Memorial contributions may be made to the American Cancer Society P.O. Box 22718 Oklahoma City, OK 73123-1718 or the Angel Garden at Hubbard Hill, 28070 County Rd #24 West, Elkhart, IN 46517.