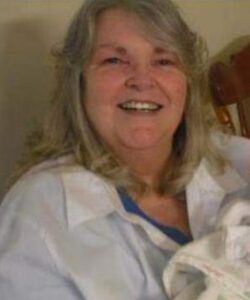 Born in Muncie, Indiana on October 13, 1946, Martha was the daughter of Henry Clay and Mary Elizabeth (McClellan) Kenney. She graduated from Muncie Central High School and studied physical therapy at Ball State University.

She married James “Jim” Bousman on December 31, 1989, in Plymouth. She worked for Procter & Gamble as a lab technician until her retirement.

Martha was outgoing, generous, and a social butterfly. She never knew a stranger and was kind to everyone. She taught her children the importance of family and a good work ethic. Martha was also an animal lover and most recently enjoyed cuddles with her two cats.

She attended High Street Methodist Church in Muncie and wintered in Palmdale, Florida during the winters. Martha enjoyed quilting, genealogy and traveling.

She is survived by her children: Elizabeth Walesiewicz of Plymouth, Brad (Karen) Beabout of Shreveport, LA, Cheryl (Brant) Morris of Savannah, TN and David (Shelley) Beabout Jr. of Plymouth; stepchildren James Bousman, Jackie Wolfe, and Robert Bousman; 20 grandchildren and “Gigi” to 15 great-grandchildren. Martha is also survived by stepsiblings: Alpha, Melanie, Alan and Christopher Collins as well as many nieces and nephews.

Martha was preceded in death by her husband Jim in 2013; her father and stepmother, Henry and Lillian Kenney; her mother, Mary; brother, Thomas H. Kenney; and stepdaughter Rosalie Bousman.

Private graveside services will be held in the New Oak Hill Cemetery, Plymouth.

To honor her love of animals, memorial contributions can be made to the Humane Society of Marshall Co, PO Box 22, Plymouth, IN 46563.