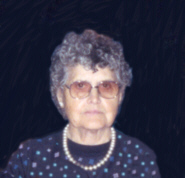 Martha M. O’Blenis, 92, died of natural causes at her residence in Warsaw, Ind., 4109 Kuder Lane, where she had lived for the past three years coming from Plymouth, at 2:50 p.m. on Friday, December 10, 2004.
Born in Wabash, Ind., on September 2, 1912, Martha was the daughter of Henry A. and Maggie M. Gustin Kuschel.
She was married to Edward L. O’Blenis. Edward died on November 25, 1974.
Martha had attended nursing school but later worked many years for Bremen Package Masters. She operated the window glue machine in the production department, retiring at the age of 72.
A fastidious homemaker, Martha enjoyed sewing, baking and the company of her grandson and great granddaughters who lived near by.
She was a member of Union Local 14739 of the Steel Workers of America.
Martha is survived by her son and his wife, Edward F. and Ann O’Blenis of Sebring, Florida. A grandson, Shawn L. Carpenter of Warsaw and two great-granddaughters, Victoria L. and Kacie L. Carpenter. Six additional grandchildren and numerous great-grandchildren also survive.
A sister, Mabel Stensel, Warsaw, and numerous nieces and nephews survive as well.
She was preceded in death by her parents, her husband, a son, James L. O’Blenis and a daughter, Kathy M. Carpenter. Two brothers and five sisters also have died before her.
The family will welcome friends to celebrate Martha’s life on Tuesday, December 14, 2004, from 5 to 7 p.m. in the Johnson-Danielson Funeral Home, 1100 N. Michigan St., Plymouth.
Funeral services will be held in the funeral home following visitation on Tuesday evening at 7 p.m. Pastor Greg Bouck of the Plymouth Wesleyan Church will officiate.
Burial take place in New Oakhill Cemetery, Plymouth.
Memorial gifts in Martha’s memory may be made to the American Cancer Society.