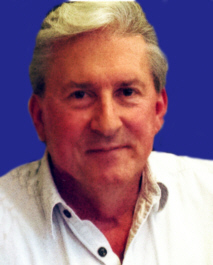 Martin Aaron Johnson, 62, passed away unexpectedly of natural causes and went to be with his Lord on Monday, February 20, 2017.
Aaron was born in Urbana, Illinois on December 4, 1954 to Mark D. Johnson and Dora Mae (Campbell) Taylor. He graduated from Seeger Memorial High School in West Lebanon, IN, and furthered his education by attending Indiana State University to attain two Bachelor Degrees, in Chemical Engineering and Science of Electronics Technology.
He worked as a supervisor in construction near his hometown. He began working for the now Honeywell Corporation in South Bend in 1986, as an aerospace chemical engineer for over 30 years. He tested all aviation brakes and components for over 30 years.
In the Beaver Creek Wesleyan Church in North Liberty, Aaron took as his wife the former Patty A. Norman on May 4, 2014. Here they were active members and he helped start the menâ€™s ministry in the church.
Aaron loved gardening his vegetables and tending to his flower garden, which lead to Patty and him canning every year. He loved fishing and has been taking yearly trips to Minnesota on family fishing trips. He enjoyed showing off this culinary talents to his family and friends. Music was a huge part of their lives and enjoyed attending Christian concerts. They enjoyed traveling and woodworking, but most of all, being with their family and grandchildren. A man of great faith, Aaron was active in the Save the Storks non-profit organization.
He is survived by his loving wife, Patty, and children: Sonja Johnson of Alabama, Kyle Johnson of Alabama and Tasha (Josh Hostetler) Johnson of South Bend; 8 grandchildren; his mother, Dora Mae Taylor of Williamsport, IN; step-children: Thad (Diana Muraca) Ward of New Jersey and Amy (Frank) Wurst of Kansas; and siblings: Paula (Roy) Thomas of Williamsport, IN and Eric (Jason) Johnson of Colorado Springs, CO.
He was preceded in death by his father, son, Anthony Quentin Johnson and his step-father, Vernon Taylor.
Visitation will be from 4-7 p.m. EST on Friday, February 24, 2017 in the Johnson-Danielson Funeral Home, 1100 N. Michigan Street, Plymouth.
Funeral services will be held at 11 a.m. EST on Saturday, February 25, 2017 in the funeral home with Revs. Steve Cunnington and Steve Runyon officiating. Visitation will resume one hour prior.
Burial will be in the Fletcher Cemetery in Hamlet, Indiana.
Memorial contributions can be made to the Save the Storks 10807 New Allegiance Drive, Suite 150
Colorado Springs, CO 80921.