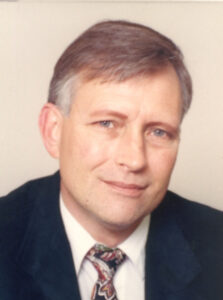 Martin Andrew “Marty” Morrison II, died from complications of Multiple Myeloma in Memorial Hospital, South Bend, at 7:36 p.m. on Wednesday, April 25, 2007. He was 63-years-old. Even in the face of illness, Marty’s attitude remained positive and determined – he ran a good race.
Marty was born in Frankfort, Indiana, on December 2, 1943. He was the son of Millard C. and Grace (Morrill) Morrison. Some of his fondest childhood memories were the summers spent on the coast of Maine with his family.
A 1961 graduate of Frankfort High School and a ’65 graduate of Indiana University, Bloomington, Marty went on to graduate in 1970 from the Indiana University School of Law in Indianapolis.
He met his wife, Karen I. Ashe on the Bloomington Campus. They were married in Fort Wayne on December 20, 1965.
The young attorney first practiced in Frankfort with his father, brother and uncle in the family firm, Morrison, Morrison & Morrison. In 1971, he moved to Plymouth and joined the Chipman, Chipman and Rakestraw law firm where he was a valued partner for a number of years.
He practiced independently prior to forming Morrison & Morrison with his son, Marc, in 1992. Together, Karen and Marty founded the Marshall County Title, Inc., which operates today.
He was admitted to practice in front of the Supreme Court of the United States and was a member of the Marshall County and the Indiana State Bar Associations. He had served as counsel for the Marshall County Commissioners, Planning Commission, Zoning Appeals and Drainage Board. Marty served as judge of the Plymouth City Court from 1976-1980, and has served as special judge and judge pro-tem in both the Marshall Circuit and Superior courts.
He also held an Indiana auctioneer’s license and was a past director of the Marshall Co. United Way Board.
Marty liked Celtic music and Andrew Lloyd Webber musicals. He loved felines and had a series of them: his last one is his beloved “Tuff Cat.” A name that could apply to Marty himself.
Marty was a master gardener, growing vegetables and flowers at his home: he was fond of sharing his bounty with his family and friends.
An athlete, he was a softball outfielder and tennis player for many years. He remembered with pleasure walking the famed St. Andrews golf course in Scotland, with his boys.
A White Sox baseball and I.U. basketball fan, he also enjoyed the annual Ind’y 500 races.
Back in 1999, after watching his son, Marc, and friends run in the Chicago Marathon the year before, Marty, then 55, took up the sport. He said at the time that “none of the Morrison family, in all of recorded history had ever run 26.2 miles without being chased by something huge with teeth.”
With more determination than speed, he mastered the sport. He ran in various area races and in six marathons, the last one in Chicago in 2002, with both sons, Marc and Jamey. When no longer able to compete, he remained a dedicated walker.
He was a member of the Masonic Lodge, Plymouth No. 149, the Scottish Rite & Shrine and the Plymouth Jaycees.
Marty is survived by Karen, his beloved wife of nearly 42 years and by his sons and daughters-in-law: Marc Andrew Morrison and his wife Danielle of Plymouth and James Martin Morrison and his wife Kim of Culver, with granddaughters; Amanda Grace, 8, and Sarah Eileen, 6 .
A brother, M. Morrill Morrison and wife Mary Ann of Frankfort, along with several nieces and nephews, and his mother-in-law, Wilma E. Ashe, Plymouth, also survive.
Friends are invited to celebrate the life and share memories of Marty Morrison with his family on Saturday, April 28, 2007, from 3 to 7 p.m. in the Johnson-Danielson Funeral Home, 1100 N. Michigan St., Plymouth.
There will also be calling one hour prior to funeral services at 1 p.m. on Sunday, April 29, 2007, in the funeral home. The Rev. Paul Nye, a pastor of the First Presbyterian Church, will officiate. Cremation will follow.
Memorials in Marty’s memory may be made to the Marshall County Humane Society, P.O. Box 22, Plymouth, IN 46563 or the Leukemia & Lymphoma Society, 941 E. 86th St. Suite 100, Indianapolis, IN 46240.
As an organ and tissue donor, Marty leaves a legacy of caring for others and this personal message… “Stop and take time to smell the roses.”