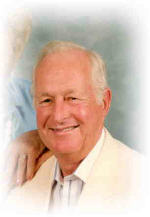 Marvin J. Kraft, 82, 10372 Pretty Lake Trail, died following an illness, in St. Joseph Regional Medical Center, Plymouth , at 5:10 a.m. on Wednesday, July 24, 2002. Born in Michigan City, Ind., on July 9, 1920, he was the son of Joseph and Carrie Baessler Kraft. He graduated from Niles high School, Niles, Mich. in 1938 and from Michigan State University, East Lansing, in 1942. In the ROTC at Michigan State, Marvin served in World War II with the U.S. Army Coast Artillery unit. He was discharged as a major in 1954. He was a lifetime member of the Veterans of Foreign Wars. On June 6, 1942, in Niles, Marvin and Dorothy Landeck were married. During their life together, the family lived in Union City , Mich. , for 11 years, Battle Creek , Mich. , for a year, Niles , Mich. for 13 years and New Castle , Ind. for two years. In 1969, they moved to Plymouth where Marvin became plant manager of Shamrock Homes for over 30 years, retiring in 1981. He loved to play golf and was a fierce competitor of the game. He was a longtime member of the Plymouth Country Club, serving on many committees. He enjoyed watching collegiate football and basketball games, and was an expert at dominos and many different card games. He could fix almost anything, enjoyed taking care of his homes in Plymouth and Florida where he and Dorothy wintered for many years, and could tell a good joke with gusto. He was a devoted member of St. Michael’s Roman Catholic Church and Eagles Lodge, both of Plymouth . Marvin is survived by, Dorothy, his devoted wife of 60 years and by their children: a son, two daughters, three grandsons and a granddaughter. They are: Dan Kraft and his son, Nicholas Kraft, both of Avon, Ind.; Lana and Michael Hand, Niles, Mich., and Patty and John Romano and their children, Jacob, Christopher and Kasey Ann, all of Elgin, Ill. A brother, Howard and Lorna Kraft, Traverse City , Mich. , and sister-in-law, Vella Kraft, of Kentucky , survive along with several nieces and nephews. Marvin was preceded in death by his parents, a sister, Clara Kraft Lehman and a brother, Raymond Kraft. Friends may come to share memories with the family at St. Michael’s Catholic Church, 611 N. Center St. , Plymouth , on Saturday, July 27, 2002 , one hour prior to a Memorial Mass of Christian Burial to begin at 10:00 a.m. The Rev. Father Bernard Rosinski, a long-time family friend, will officiate. Mass requests to St. Michael’s Church and Memorial gifts in Marvin’s memory may be made to the Marshall County Cancer Society, c/o P.O. Box 895 Plymouth, IN 46563