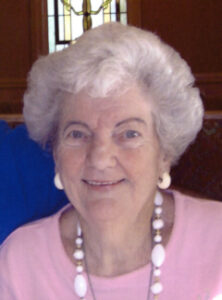 Mary Alice Kloenne, 86, a Plymouth resident since 1992, coming from Logansport, passed away at 1:15 a.m. on Thursday, February 13, 2014, in Miller’s Merry Manor, Plymouth.
The daughter of Merle and Thelma B. (Haymer) Huffman, Mary was born on July 25, 1927 in Logansport. She was a 1945 graduate of Logansport High School.
Mary was married to Fred Kloenne who preceded her in death in 1985. On New Year’s Eve, 1987, she met Buel Wheeler and they were companions for 20 years.
She had worked as a customer service operator for United Tech in Logansport for 30 years, retiring on February 2, 1988.
Mary was a loyal supporter of the Disabled American Veterans, she also enjoyed shopping, taking care of people and was a generous and sweet person.
Surviving Mary are two sons: Paul Snyder of Logansport and David (Cindy) Wheeler of South Bend; two daughters: Joy (Wayne) Williams of Syracuse and Joan K. Servis of Plymouth; a son-in-law: Philip Morrow of Marion; a granddaughter Brenda Isaak of Indianapolis along with 13 other grandchildren and 5 great grandchildren.
She was preceded in death by her parents; her husband, Fred Kloenne; two daughters: Jean Boocher and Brenda Kay Morrow and her companion, Buel Wheeler.
Visitation will be from 1 to 3 p.m. on Saturday, February 15, 2014, in the Johnson-Danielson Funeral Home, 1100 N. Michigan Street, Plymouth.
Funeral services, officiated by the Rev. Ben Norton of the New Beginnings Nazarene Church in South Bend, will be held immediately following visitation at 3:00 p.m. in the funeral home. Burial will take place in Ever Rest Cemetery, Logansport.
Memorial gifts may be made to Breast Cancer “Ounce of Prevention” c/o The Oliver Family, 1001 E. Jefferson St., Plymouth, IN 46563