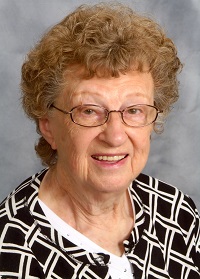 Mary Alice (Long) Fish, 97, passed away at 9:45 a.m. on Wednesday, November 6, 2019, at her family home in Argos, IN. Born in LaPaz, IN on September 2, 1922, Mary Alice was the daughter of the late Mahlon and Laura (Wright) Long, she was one of ten children. Raised in the area, Mary Alice graduated from Plymouth High School in 1942. On November 23, 1943, in Mountain Home Air Force Base in Boise, Idaho, Mary married Kermit D. Fish.
She was a cook for St. Michaelâ€™s Catholic Schools and for Plymouth High School. Mary Alice and Kermit managed rental properties for numerous years. The joy of her life was her family, grandchildren, and great-grandchildren.
Mary Alice is survived by her children, sons Larry L. (Kathryn) Fish of Rescue, CA; and Jerry D. (Susan) Fish of Lawrenceville, GA.; and daughter Nancy K. (Ron) Hensley of Argos, IN; her grandchildren Scott (Dana) Fish, Christopher (Marlene) Fish, Brice (Venus) Hensley, Kimberly (Joseph) Edwards, Mary (Michael) Edwards, Aaron Fish, Laura (David) Baldwin, Savannah (Heath) Kirin, and Carolyn Hensley; twenty-three great-grand-children and three great-great-grandchildren; her sister-in-law Dolores Long; several nieces and nephews and many other friends and family members also survive. Preceding her in death are her husband Kermit D. Fish; her parents, Mahlon and Laura; and all of her siblings, Doris, Esther, Iris, Modest, Howard, Emory, Earl, Nelson, and Glen. Visitation will be held on Saturday, November 9, 2019, from 11:00 a.m. until 1:00 p.m. with funeral services to follow at 1:00 p.m. at the Johnson-Danielson Funeral Home 1100 N. Michigan Street, Plymouth, Indiana with Pastor Ronald Hensley and Pastor Joseph Edwards of The Church of Jesus Christ, Argos officiating. Burial will follow at the Maple Grove Cemetery, Argos, Indiana
In lieu of flowers donations in Mary Aliceâ€™s name can be made to the Center for Hospice Care 112 S. Center St. Plymouth IN 46563