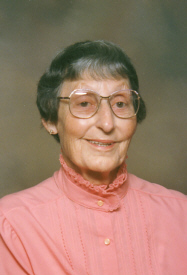 Mary Catherine Splix, 92, a lifetime Plymouth resident, formerly living in Garden Court East, died of natural causes in Miller’s Merry Manor, Plymouth, at 7:50 p.m. on Saturday, October 8, 2005.
Mary was born the daughter of Andrew C. and Mary C. (Zehner) Richard on March 6, 1913, in Plymouth, Ind.
She attended Linkville School and Plymouth High School.
On June 16, 1930, in South Bend, Mary and Donald S. Splix were married. Donald died on their 58th wedding anniversary, June 16, 1988.
Mary was a sales clerk at People’s Drug Store in Plymouth, during the 1950s and 1970s.
A real homebody, she enjoyed gardening and needle work and knitting. She was a wonderful cook and loved to bake.
A member of St. Michael Roman Catholic Church, Mary had been an active member the Altar Rosary Society.
She is survived by two children: a son, Stanton C. and Teresa Splix and a daughter, Betty J. Heiden, all of Plymouth.
Two grandsons, Nick and Cheryl Splix and Michael Splix, all of Plymouth, and four granddaughters also survive her death. Her granddaughters are: Peggy and Jeff Nelson, Lake Worth, Fla.; Tamela and Doug Voreis, Conn.; Debbie and Steve Slemp, Plymouth, and Patti and Oak Noell, United Kingdom, Wales.
Fifteen great-grandchildren and three great-great-grandchildren survive as well.
Mary was preceded in death by her parents; her spouse,Donald; Sandra Splix, a granddaughter and two brothers, Lawrence and Alonzo Richard.
Friends will be welcomed at the Johnson-Danielson Funeral Home, 1100 N. Michigan St., Plymouth, to celebrate the life of Mary Catherine Splix on Tuesday, October 11, 2005, from 5 to 7 p.m.
A rosary will be prayed at 4:30 p.m., prior to visitation.
A Mass of Christian Burial will be held on Wednesday, October 12, 2005, at 11 a.m. at St. Michael’s Roman Catholic Church, 615 N. Center St., Plymouth, Ind. The Rev. Father William Kummer will officiate.
Burial will follow in New Oakhill Cemetery, Plymouth.
Memorial gifts in Mary’s memory may be made to St. Michael’s Parish.