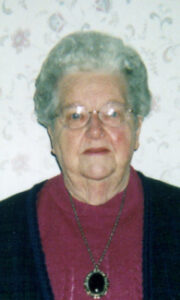 Mary E. (Beam) Gridley, 87, a lifetime Marshall County resident, living at River Park, passed away of natural causes in Grace Village, Winona Lake, at 12:20 a.m. on Sunday, November 18, 2012.
Mary was born in Plymouth, the daughter of Francis X. and Gladys H. (Nellans) Sullivan on February 4, 1925.
She graduated from Plymouth High School with the class of 1942.
In 1943, she married Dale A. Beam. Dale passed in 1970, and Dean G. Gridley and Mary were married in Plymouth on November 4, 1972. Dean died in 2009.
Mary was the Credit Auditor for Sears Roebuck & Co. for 22 years. She then was Credit Auditor for the Fulton and Marshall County Farm Bureau Co-op for ten years, retiring in 1989.
For several years, Mary enjoyed delivering Meals on Wheels. She liked camping, flower gardening and reading. She also was a volunteer at the Marshall County Museum for a number of years. A member for over fifty years of the Plymouth First United Church of Christ, Mary was an active member of the Excelsior Sunday School Class and enjoys the company of other retired church members.
Mary is survived by three sons and their families. They are: Steven D. (Carol) Beam of Walkerton, and their children: Lori, Jennifer and Steven, Jr., son Michael B. (Janet) Beam of Plymouth, and their sons Michael II and Andrew, and son Daniel D. (Jeanne) Beam of Warsaw, and their daughters, Nicole and Andrea.
Three step-children and their families survive as well. They are: Bruce Gridley and Dr. Barry Gridley both of Centerville, OH, and Glenn Gridley of Plymouth.
In addition, nineteen great-grandchildren and one-great-great-grandchild, together with a sister-in-law, Marjorie Beam of Plymouth, survive her passing.
She was also preceded in death by a brother Francis Sullivan.
Visitation will be on Wednesday, November 21, 2012, for 1 to 3 p.m. in the Johnson-Danielson Funeral Home, 1100 N. Michigan St., Plymouth.
Funeral services for Mary will follow visitation at 3 p.m. in the funeral home. The Rev. Dr. Ronald Liechty will officiate.
Interment will be in New Oakhill Cemetery.
Memorial donations may be made to the First United Church of Christ, 321 N. Center St., Plymouth, IN 46563 or to the American Macular Degeneration Foundation, P.O. Box 515, Northampton, MA 01061-0515.