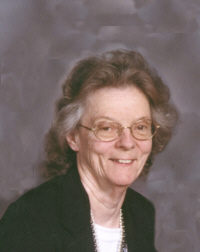 Mary E. Ranney, will be lovingly remembered by her husband of 56 years Kenneth, for her gentle heart and tender touch; her daughter, Beth, for the special friendship they shared; her son, Ken, for the inspiration and music in his life; her granddaughters for the magic washing behind their ears, her grandson, for her guidance and love, and her many nieces, nephews, friends and relatives for her Christian goodness and Faith. She will remain alive in their hearts and memories forever.
Mary, 79, a resident of Plymouth for the past ten years, died in the company of her family, on the family homestead, 7170 Jarrah Road. She became ill in February and struggled with cancer for the past seven months and passed away at 11:20 a.m. on Saturday, Sept. 10, 2005. She was born in Plymouth on May 27, 1926, the daughter of Leo C. and Clara E. Grimm Berger. She attended elementary school at Inwood and graduated from Plymouth High School with the class of 1944. She continued her studies at Stephens College and graduated from Northwestern University with a degree in music education.
After a year of teaching music in the Nappanee public school system, Mary and Kenneth I. Ranney were married in Plymouth on August 27, 1949.
They moved to Columbia, Mo., where she resumed her education. In 1953, Mary graduated from the University of Missouri with a degree in elementary education. She taught elementary school in Bellevue, Penn., while her husband received his medical degree from the University of Pittsburgh.
They then moved to the metropolitan Detroit area where she taught fourth grade in the Hazel Park public school system.
Following the arrival of her two children, Mary devoted herself to raising her family.
She became active in a wide variety of activities, serving at times as choir director, church organist, accompanist and Stephens Series Lay Minister at St. Paul Lutheran Church in Royal Oak, Mich. She also dedicated her time to supporting the athletic, academic and musical activities of her children.
After her husband’s retirement in 1990, the couple moved back to Plymouth and built their dream home on the very site where Mary had been born. Following their relocation, she was involved in various activities at Calvary Lutheran Church in Plymouth, where she became a member.
She loved Dachshunds and collected figurines of the breed. She also had an extensive assortment of Beanie Babies. She admired humming birds and dozens of them would gather at her feeders daily where she could watch their comings and goings.
Mary is survived by her spouse Kenneth, her son Kenneth I. Jr. and Elizabeth Formentini, his fiancée of Rockville, Md., her daughter, Beth E. and husband Marcelo Osorio of Hixson, Tenn. along with two granddaughters, Magdalena and Gabriela Osorio and grandson, Francisco Osorio.
Mary was preceded in death by her parents and by two brothers, John and Lloyd Ritchey and one sister, Dorothy Ritchey.
Friends are invited to celebrate the life of Mary Ranney with her family from 4 to 8 p.m. on Tuesday, Sept. 13, 2005, in the Johnson-Danielson Funeral Home, 1100 N. Michigan St., Plymouth.
Friends may also call one hour prior to services at the Calvary Lutheran Church, 1314 N. Michigan St., Plymouth, on Wednesday, Sept. 14, 2005, at 10 a .m. Steven Resner, pastor of the church, will officiate.
Burial will be in New Oakhill Cemetery, Plymouth.
Memorial gifts in Mary’s memory may be made to Calvary Lutheran Church, Plymouth, Ind., St. Paul’s Lutheran Church, Royal Oaks, Michigan, or a charity of the donor’s choice.