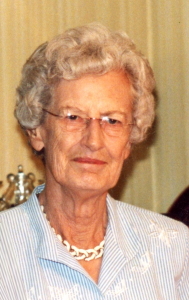 Mary Ellen Hission, 96, of Plymouth, Indiana, died of natural causes on Thursday, September 4, 2019. She was born on June 25, 1923 in Shoals, Indiana to John and Grace (Briscoe) Hission, both deceased. She was also preceded in death by one brother, John T. Hission.
At Indiana University, Mary Ellen worked part-time in the comptrollerâ€™s office. She graduated in the class of 1944. Her first teaching position was in business education at Tyner (Indiana) High School. She earned a Masterâ€™s Degree in Business Education from Indiana University in 1947 and a Masterâ€™s Degree in Library Science from Western Michigan University in 1957. She taught at Tyner and in the John Glenn School Corporation for 46 years, retiring in 1990. After retirement, she volunteered at the public library in Plymouth, teaching people how to read, make correct change, and other life skills.
Growing up on the family farm, Mary Ellen helped with chores and general farm work. She became interested in antiques because the landlady in college â€œdraggedâ€ her around to antique shops on the weekend. She then began her own collection. In about 1975, she opened an antique shop in her home which she operated until 2012 when she sold most of her collections. She eventually became a certified antique appraiser.
Mary Ellen lived in the Tyner-Walkerton-Plymouth area all of her adult life. She had many friends in the community and became acquainted with Carol while teaching at Tyner. May Ellen was the one designated by the Hoovers to tell Carol that her mother had died. At the Hoover Thanksgiving dinner in 1967, the Hoovers immediately adopted Mary Ellen into their family when they found out she had no relatives. In 1969, she and Carol began sharing a house. Carol learned the antique business from Mary Ellen, and Mary Ellen learned to ride horses with Carol. Together they continued their involvements in antique shows and horse shows until 2010 when Carol died.
Mary Ellen loved to travel, and she had many good stories to tell about places she went and the people with whom she traveled. In addition to Canada and Mexico, she visited England, Scotland, Germany, France, Switzerland, Italy, Spain, Portugal, Austria, Norway, Sweden, Holland, Belgium, Luxemburg, and Israel. She also enjoyed needlework. She knitted many sweaters and prayer shawls, created needlepoint, and embroidered.
Visitation will be Sunday September 8, 2019 the Johnson-Danielson Funeral Home in Plymouth from 3 p.m. until 6 p.m. Visitation will continue at 1:00 p.m. on Monday September 9, 2019 at the Church of the Brethren 1130 N Michigan St, Plymouth, IN. until the service at 1:30 p.m. Burial will follow the service at the Morris Cemetery.
In lieu of flowers contributions to the Plymouth Church of the Brethren 1130 N Michigan St, Plymouth, IN or Center for Hospice 112 S Center St, Plymouth, IN 46563 would be appreciated.