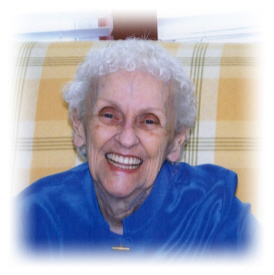 Former Plymouth resident, Mary Janis Hallman, age 90, of Westerville, Ohio went to be with the Lord on August 3, 2008. In May, Mary celebrated her 90th birthday. Family and friends from all over the US were able to attend. After the party, Mary commented – “No mother could ever have a sweeter memory.”
Mary was born in Indianapolis, IN on May 23, 1918. She was the daughter of the late Coleman D. and Gladys V. (Lutz) Moore. Mary was twice widowed. Husbands, James D. Heinlein and Ken (Con) Hallman, preceded her in death.
Mary lived in Plymouth, IN for 40 years. She was very active in her church, St. Thomas Episcopal; and was active in the community. Mary was a gifted seamstress. She designed, created and built the first drum major and majorette costumes worn by Dick Botset and Barb Vieweg Tanner. She played golf and bridge for many years and was a prolific reader, usually reading 4-5 books a week. She was a member of the Daughters of the American Revolution National Society.
Mary leaves behind many beloved family and friends:
Surviving is one daughter Mary Lou Burgess of Bloomington, IN and three sons: Dan (& Diane) Hallman of Landrum, S.C, Jack (& Jackie) Hallman of Westerville, OH, and Bill Hallman of Granger, IN. Mary had 8 Grandchildren: Danny and Jack Burgess, Danny Hallman, Jordan and Gabe Hallman, Jenny Hockenberry, and Emily Cooley. In addition she was blessed with 5 great grandchildren: Preslee Burgess & Jagger Van Burgess (born on the day Mary passed) of Medford, OR, Brooke Hockenberry of Westerville, OH, Noah & Asher Cooley of Fairview Heights, OH. Brothers J. P and Jerry Moore and sister Jobe Davis also survive her. Beloved friends and neighbors include Ann Ellis Howe and children Debbie DeMuth and Lindy Waldman, Greg Ellis and Cindy Altieri; and beloved friend Katie Kubley and beloved friend Mary Belle Shemberger Henry.
The family will receive friends on Friday, August 8th from 11:30 a.m. – 1:00 p.m. in the St. Thomas Episcopal Church, 400 N. Center St., Plymouth, Indiana where a funeral mass will be held at 1 p.m. with the Rev. Fr. John Schramm officiating.
Burial will follow in the New Oakhill Cemetery, Plymouth.
The family requests that in lieu of flowers, memorial donations may be sent to: HomeReach Hospice, 80 East Broad Street, Floor 31, Columbus, OH 43215-3707 or to the St. Thomas Church.