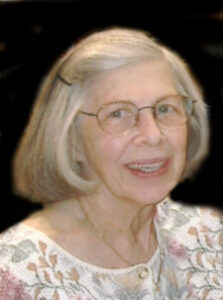 Mary Jane Holland, 87, 500 Miner St., Plymouth, passed peacefully in the Elkhart Hospice House, surrounded by her children at 2:30 a.m. on Wednesday, July 15, 2009.
Mary Jane was born in Hibbard, IN., on November 27, 1921. She was the daughter of Homer Winfield and Edna Emmaline Pero Albert.
She graduated from Culver High School with the class of 1939, and from a beauty college in South Bend shortly thereafter. She worked as a licensed beautician and manicurist for many years and used her skills with her family and friends.
A very talented and independent woman, she lived in the same house for 62 years and drove a car up until the time of her death.
On June 22, 1941, in La Paz, IN., Mary Jane and Eldon “Dutch” Clyde Holland were married. Eldon, after 58 years of marriage, died on August 22, 1989.
Mary Jane worked at Meck’s during WWII when her husband was in the service of their country.
A homemaker and mother for most of her life, she counted among her interests and activities such things as baking, canning, quilting and bowling in a Plymouth league in the 1950s.
An accomplished seamstress, when her children were growing up, she made all of their clothes, including prom dresses and school clothes. She sewed lap robes and the curtains for their home and baked homemade sweet rolls for her family and their friends.
Mary Jane loved young and old people alike. She cared for them when they were sick and nursed them back to health.
A lifelong member of the Trinity United Methodist Church, she was a faithful worker with Ladies Aid.
Mary Jane is survived by two daughters, a son and a daughter-in-law. They are: Kathy Holland, Highland, IN.; Jan (William) Berger, Valparaiso, IN.; Greg (Ann) Holland, Grovertown, IN., and Sandra Holland, Plymouth, IN.
Seven grandchildren, two step-grandchildren, nine great-grandchildren and four step-great-grandchildren, together with a step-brother, Robert Albert, Culver, survive as well.
Mary Jane was preceded in death by her parents, her husband, three sisters; Frieda, Verda and Mildred and a son, David Lynn Holland, and a grandchild, William David Holland.
Friends are invited to visit with the family from 1 to 3 p.m. on Saturday, July 18, 2009, in the Johnson-Danielson Funeral Home, 1110 N. Michigan St., Plymouth.
Funeral services for Mary Jane will follow the visitation at 3 p.m. in the funeral home. The Rev. Tom Padberg, chaplain for the Center for Hospice and Palliative Care, Inc., will officiate.
Interment will be in the New Oakhill Cemetery, Plymouth.
Memorial gifts in Mary Jane’s memory may be made to the Elkhart Hospice House, 22579 Old US 20 East, Elkhart, Indiana 46516.