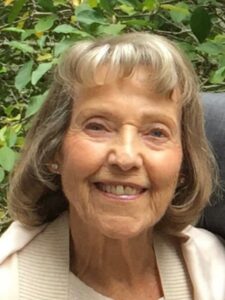 Born in Bourbon, Indiana on December 27, 1926, Jayne was the daughter of Charles and Mary (Corl) Elkins. She graduated from Lincoln High School in Plymouth and attended Indiana University in Bloomington where she was a member of the Chi Omega Sorority. Some of her fondest teenage memories were dancing with friends to big band music at The Colonial in Rochester.

On September 1, 1947 Jayne married Gene Pesch, who had just returned from the Navy as World War lI ended.

Jayne helped her husband, Gene, run Pesch TV, a television sales and service business in Plymouth. She also worked at Bosworth’s and Treat’s For Her as a bridal consultant in downtown Plymouth for over 20 years. Later in life, her love of serving others led her to become a site director for Real Services in LaPaz for seven years until she retired at age 87.

She was an active member of St. Michael Catholic Church where she spent many years singing alto in the church choir and growing her faith in a Bible Study group. She volunteered at the Dorcas Society, a community organization that served the needy and was her sons’ Cub Scout den mother. More recently, she volunteered at the Marshall County Museum watching children delight in the Train Room. She was often spotted riding her bicycle until age 90 and enjoyed being outdoors where she could soak up the sunshine.

She was preceded in death by her husband, Gene, in 2005 as well as her parents and brothers and sisters: Max (Skip), Lois, Betty, Charles, Joe and Don (Buck). She is survived by sister-in-laws, Shirley Pesch and Nancy Krause and many beloved nieces and nephews.

Memorial contributions can be made to St. Michael Church, 612 N. Walnut St., Plymouth or Center for Hospice Care, 112 S. Center St. in Plymouth.