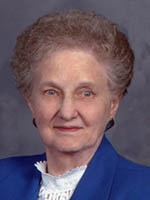 Mary Lou (Mrs. Victor) Stockman, 88, passed away peacefully at 9:45 p.m. Saturday, February 17th in the Millerâ€™s Merry Manor, Plymouth. She was a former resident of Hope Boulevard in Plymouth.
Mary Lou was born in South Bend, Indiana on September 27, 1929, the daughter of Frederick Max and Letha Irene (Reed) Randt. She graduated in 1947 from John Adams High School.
While attending The Peoples Church in South Bend, Mary Lou was introduced to a young man from Plymouth, Victor E. Stockman. On October 10, 1948 in South Bend, she became his bride. From that day and for the next 63 years forward they loved and supported each other in a Christian way of life. They became parents to two children: Vickie Lou and Wayne Allen. In 1958, they were founding members of the Sunrise Chapel in Plymouth, where Mary Lou would play the organ and piano for the next 53 years.
The family established nine coin-operated laundries in four counties and continues with the Country Charm Cleaning Center yet today.
Mary Lou was active with church activities, enjoyed music, cross-stitch and traveling the United States and Europe with Vic which included an annual trip to Hawaii for 20 years.
She is survived by daughter Vickie L. (Ken) Knipp of Colorado Springs, CO and their children: Tim (Kristi) Knipp of Bellingham, WA, Gabe (Brooke) Knipp of Colorado Springs and Janae Knipp of Cuenca, Ecuador. Son Wayne A. (Becky) Stockman of Plymouth and their children: Alan (Rita) of Greenwood, IN, Kristi (Eric) Kavicky of Cuba City, WI and Katie (Steve) Bare of Plymouth. Fourteen great-grandchildren also survive.
Surviving is a sister Betty (Manford) Robinson of Bluffton, Ohio and a brother Larry (Kay) Randt of Crumstown along with several nieces and nephews.
Mary Lou was preceded in death by her spouse Vic on March 19, 2012, her parents and a brother Bill Randt.
Visitation will be held on Wednesday, February 21st from 10 â€“ 11:30 a.m. in the Plymouth Community Church (formerly Sunrise Chapel) 11802 Lincoln Highway East. Funeral services will immediately follow at 11:30 a.m. with Pastor Nick Stanton.
Burial will follow in the New Oak Hill Cemetery, Plymouth.
Memorial gifts may be made to the Plymouth Community Church.