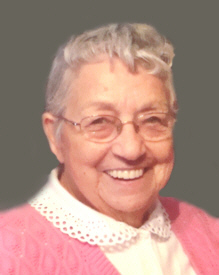 Mary Lou Thompson, 89, and a resident of Marshall County since 1967, passed away in her home at 5:10 p.m. on May 6, 2013.
Mary Louise was born in Pekin, Indiana to John J. and Mattie F. (Davis) Tash. Mary Lou graduated from Hanover College in 1947 and completed her graduate work at Indiana University. She was a member of the Phi Mu Sorority.
On June 3, 1950 Mary Lou married Richard L. Thompson in South Bend. He preceded her in death on October 20, 1975.
Mary Lou taught at Saint Mary’s College in Notre Dame, Indiana. She was the Chairman of the Physical Education department as well as an instructor of physical education and tennis coach. In 1989 she retired as an assistant professor after 36 years with the college. One of her favorite activities each year was attending the annual Presidents Dinner held on campus. In 1973 she became a 4-H leader. She loved the 4-H Program and this year marked her 40th year as a 4-H leader in Marshall County and Polk Township. Over the years she was the leader of many projects including two of her favorites Stamps and Geology. She was a member of the Marshall County Church of Christ. She loved her church and was very dedicated to it and its congregation. She is survived by three children: William J. (Emily) Thompson of Eugene, OR; Stephen R. (friend Wendy) Thompson of Plymouth; and Debra L. (Gordon) Mosson of Plymouth; seven grandchildren Drew, Reid, Chad, Jared, Aaron, Mandy, and Kendra; two great-grandchildren Anna and Tyson; and a sister-in-law, Amy Thompson of Warsaw.
Mary Lou was preceded in death by her parents, brother, John J. Tash Jr. and a son, David M. Thompson of Warsaw.
Visitation will be held on Monday, May 13th from 10:00 a.m. -12:30 p.m. at the Johnson-Danielson Funeral Home, Plymouth.
Funeral services will immediately follow at 12:30 p.m. in the funeral home, officiated by Rev. Art Adams. Burial will be in the Maple Grove Cemetery, Argos.
Memorial contributions can be made to the Marshall County 4-H Council, Marshall County Building, MC 4-H, 211 W. Madison St., Plymouth, IN 46563.