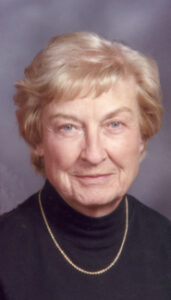 A lifetime Marshall County resident, Mary Marie Klein, 87, passed away of natural causes at 2:55 a.m., Friday morning, March 9, 2012, in Pilgrim Manor.
Mary was born in Tyner, January 23, 1925, and raised as the daughter of Fay E. and Rebecca V. (Trump) Ward. She attended Tyner grade school and graduated from Plymouth’s Lincoln High School in 1942.
On July 12, 1942, in the First United Church of Christ, Mary M. Jarrell became the bride of Richard Hal “Dick” Klein. They most recently made their home at Pretty Lake and after 66 wonderful years together, Dick preceded her in death on August 30, 2008.
One of Mary’s first jobs was working at the G&G grocery store in downtown Plymouth.
With an entrepreneurial spirit, Mary embarked on a 35 year career as the owner and operator of the popular Eastside Nursery School located in her home on East Garro Street in Plymouth. She will be remembered lovingly by hundreds of her students for her leadership and teaching skills. She retired in 2000, and spoke often of how much she missed the children. As helpmate and partner, Mary supported her husband with the Hippity Hop Restaurant and Sunrise Coffee Shop.
As a devoted Christian, Mary was a longtime member of the First United Church of Christ: she had served on many committees and initiated the popular Annual Spring Cookie Walk fundraiser for the church. Along with being a choir member she was the Sunday school department head for a period of 25 years.
Her community and social organizations included being a member of the Delta Theta Tau philanthropic sorority, the Pretty Lake Red Hat Steppers, a Bridge and Gin Rummy Club member for over 35 years.
She enjoyed the game of golf and loved watching the many activities of her grandchildren.
She was affectionately known as Dodie to her family. Survivors include her two daughters and their families. Daughter Susan and husband Tom Brinton of St. Augustine, FL., and their children: Jessica Susan Klein Brinton who is with The Center for Global Development in Nairobi, Kenya, and Amanda Dianne Klein Brinton with the Peace Corps in Ecuador. Daughter Sarah Lynn and husband Dan Flynn with their children also survive. They are: upon graduation, Second Lieutenant Sean Patrick Klein Flynn, United States Army, to be posted at Ft. Carson, CO, Connor Richard Klein Flynn, Matthew Thomas Klein Flynn and Mary Catherine Klein Flynn, all of Plymouth.
Also surviving are: two sisters; Nina Phillips of Hilton Head, SC and Verda Bussanmas of Bremen, along with two dear sisters-in-law; Helen (Mrs. Charles) Glaub and Betty (Mrs. Louis) Wenino, both of Pretty Lake and numerous nieces and nephews.
She was preceded in death by her parents, her husband, two sisters; Kay Bergman and Donna Kubley and two brothers; Walter and Michael Jarrell.
The family will receive friends on Sunday, March 18, 2012, from 2 to 4 p.m. in the sanctuary of the First United Church of Christ, 321 N. Center St, Plymouth. Funeral services for Mary will begin at 4 p.m. with Pastor AnnMarie Kneebone officiating. A funeral dinner will immediately follow in the church fellowship hall.
Burial will be in Oakhill Cemetery.
In lieu of flowers, memorial gifts may be made to the First United Church of Christ, 321 N. Center, Plymouth, IN. 46563.