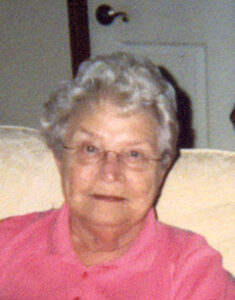 Mary Milner Osborne, 83, of Hillcrest Ave., Plymouth, died in St. Joseph Regional Medical Center, Mishawaka,at 11:35 a.m. on Friday, April 1, 2011. Mary was born in Argos on Sept. 14, 1927. She was the daughter of Ross Vernon and Carrie Catherine Eaton Snoke.
She graduated from Plymouth High School with the class of 1945, and married Robert Milner, who died on September 12, 1976 at the age of 50, she later married Bob Osborne, who also preceded her in death.
She enjoyed playing golf, sewing and quilting and was a member of the VFW auxiliary Post 1162.
She retired from Ferro after many years of service.
She is survived by two sons: Dan (Sherry) Milner, Plymouth, Ind. and David (Beth) Milner, Romeoville, Ill., six grandchildren and two great grandchildren also survive along with two sisters and one brother. The sisters are Eilene Hammond, Okeechobee, Fla., Nadeane Dodson, Plymouth, In. and a brother, Vernon (Jean) Snoke, Georgia. Seven nieces also survive.
Mary was preceded in death by her parents, her husbands and one sister, Betty Jean Smith.
Visitation will be from 12 to 2 p.m. on Tuesday, April 12, 2011 in the Johnson-Danielson Funeral Home, 1100 N. Michigan St. Plymouth, IN.
Funeral services will follow visitation at 2 p.m. and will be conducted by Tom Padberg, chaplain for The Center Hospice. Entombment will be in the New Oakhill Mausoleum.
Memorial gifts in Mary’s name may be made to a charity of the donor’s choice.