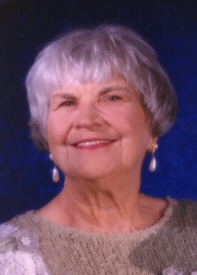 Mary Patricia Wade, 89, passed away in the Catherine Kasper Life Center at 3:45 a.m. on Wednesday, November 20, 2013.
Mary was born August 1, 1924 in Chicago, Illinois, the daughter of Frank P. and Cecelia Alze (Roy) Edwards.
She graduated from Hobart High School with the class of 1941, and in 1945, from Mercy Hospital as a registered nurse.
She was married to her first husband, Earl J. Stephens on September 12, 1949 in Gary, Indiana. He preceded her in death. On December 2, 1962, she and Lloyd P. Wade were married. He then preceded her in death on October 5, 1997. In 2001, Mary moved to Donaldson from Chesterton, Indiana and made her home at the Maria Center at Ancilla Domini.
She loved dogs and cats and saved many of them. She enjoyed playing cards and camping.
Mary is survived by two daughters and three sons. Her daughters are; Virginia L. (Don) Hamilton, Greenville, SC, and Joanne (Gene) Mattox, Brownsburg, Indiana. Her sons are; Lance M. (Judy) Stephens, Brownsburg, Indiana, and Lloyd P. (Alicia) Wade, Valparaiso, Indiana. A sister-in-law, Kenneth E. (Lynn) Stephens, Evansville, Indiana,
Seven grandchildren: Lance, Eric, Adam, Luke, Emily, Jimmy, Heather and two great-grandchildren also survive.
Mary was preceded in death by her parents, her husbands, a daughter, Susan C. Stephens, sons; James E. Wade and Kenneth E. Wade, two brothers, Eugene and John Edwards and her sister, Virginia Bertucci.
Calling will be held in the Ancilla Domini Chapel, 9601 Union Road, Donaldson on Monday, November 25th from 10 a.m. – noon EDT with a rosary being said at 11:30 a.m. Calling will continue at 1 p.m. until the Mass of Christian Burial at 1:30 p.m. with Fr. John Zemelko officiating.
Memorials in Mary’s memory may be sent to the Maria Center, P.O. Box 1, Donaldson, IN 46513.