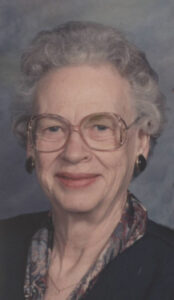 . Mary R. Davis, 94, formerly of Argos, passed away on Saturday, August 16, 2014 at Miller’s Merry Manor in Plymouth.
She was born on August 21, 1919 to Clyde and Bertha (Severns) Moriarity. She received her education at Tippecanoe High School. On November 9, 1940 she married Herman in Greenwood, Indiana.
Mary worked as a receptionist for Dr. Hampton in Argos for many years until her retirement in 1970.
She was a member of the Argos Progress Club as well as the Argos Bible Church. Mary loved camping and traveling especially in Florida, Texas and Arizona where she spent her winters.
Mary is survived by her son Carl (Glory) Davis of Argos Indiana and his three daughters Tonya (Greg) Vandewater of Warsaw, IN, Cara (Dirk) Mattox of Franklin, IN and Kristi Hostetler of Nappanee, IN. She is also survived by twelve great grandchildren and one great great grandchild. She was preceded in death by her parents, her husband, her brothers L.O. Moriarity, Wendell Moriarity, Floyd Moriarity and Jim Moriarity and one sister Annabelle Lamb. Family and friends will gather to celebrate her life on Tuesday, August 19th from 11-1 in the Johnson-Danielson Funeral Home, 1100 N. Michigan St., Plymouth. The funeral service will immediately follow the visitation starting at 1 p.m. with Pastor Mark Fishburn in the funeral home. Burial will follow at the Walnut Church Cemetery, Argos.
Memorial contributions can be made to the Argos Community Ambulance Service, 125 W. Walnut St., Argos, IN 46501