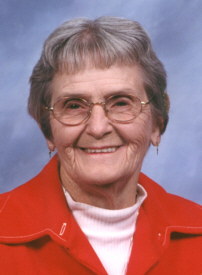 Mary Ruth Nelson Girten, 94, died peacefully at her home, surrounded by her loving family at 7:15 p.m. on Saturday, March 9, 2013.
A longtime Plymouth resident, she was born on New Year’s Eve, December 31, 1918, in Plymouth, the third of eight children of Walter and Stella Mae Nelson.
“Mother planned to go to a party that night,” Mary often said. “I don’t think she ever forgave me for spoiling her evening,” she joked.
Mary’s life has been full of joy.
Mary graduated from Lincoln High School with the class of 1936. She worked at the telephone company during the war and, in 1963, after her youngest child started first grade, she went to work in the cafeteria of the Plymouth Community School System’s Lincoln Junior High School.
The children who went through her food line still remember her cheery greetings. They have said that if she thought you looked like you needed more nourishment, or were too thin to suit her, your scoop of potatoes became larger and the gravy thicker.
She retired in 1994 at the age of 76.
Mary met her beloved Harry in 1939, at a Memorial Day parade on South Michigan Street. Their first dates were at the Plymouth Skating Palace.
“I loved to skate and so did he,” she said.
They were married on January 26, 1941. The babies came…with a short interruption during the war…early on in their marriage. Son Larry was born in 1941, followed by Dee and Lynn in ’42 and ’43. Anne came in 1946 and Bill in ’47. Little Jane was born in 1950, Patti in ’52 and Bob in 1955.
Jane, at 10-months of age, died tragically in a household accident.
The Girten home was always open to neighborhood children. Their backyard was constantly filled with kids from all over the south side of Plymouth. They’d make up intramural and summer league basketball teams.
The boys called themselves the “South Siders.” Now grown men, they still do.
Mary always had extra food. Advice too, if you wanted it, or sympathetic silence, if you did not.
In 2006, Mary was honored as Mother of the Year by the Plymouth Pilot.
She was a lifetime member of the Trinity United Methodist Church. Hert church and her family were the most important things in her life.
Mary was always involved in her children’s activities. A huge sports fan, she was the longest holder of season tickets to home football and basketball games and a Big Red Boosters club member. She was known by all of the students as “Grandma Girten.”
Mary leaves a large and loving family to cherish her memory.
Sunday nights were special at Mary’s house.
For years, her children, grandchildren and great grandchildren would come to supper o Sunday evenings. There were usually upwards of 20 to 230 people there.
Mary would say that she never knew how many would come, but that all were welcome and welcome and “ we always seemed to have enough of everything.”
Especially love.
Her sons are: Larry (Amme) Girten: Bill (Donna) Girten, Bob Girten, all of Plymouth. The daughters are: Dee (Jim) Brown, Plymouth: Lynn (Steve) Jacox, Michigan City: Anne Gantz, Plymouth, and Patti Girten, Plymouth.
Two brothers also survive her death. They are: Wendell Nelson and Gordon Nelson. Three sisters survive as well: Joan (Fred) Wolff, Rosemarie Campbell and Helen “Mick” Nelson, all of Plymouth. Many nieces and nephews also survive.
Mary was preceded in death by a daughter, Jamie Louise Girten, her husband of 59 years, Harry Girten, and two brothers: James and Wayne Nelson.
Fourteen grandchildren survive Mary’s passing along with several step grand and great grandchildren.
The grandchildren are: Melanie (Tom) Van Dyke, Angie (Tim) Eads, Ronna (Ron) Sissel, Ted (Carol) Brown, Gina (James) Young, Nicole (Jason) Christy: Matt (Danielle) Gantz, Jill (Chris) Craig, Korey (Nate) Terronne, Blair Girten and Elizabeth, Katie (Brad) Clauss, Kasey (Evan) Record, Quentin (Ashley) Girten and Joel Girten.
Many thanks to special neighbors and care providers, Maureen and Cheryl.
Visitation will be from 2 to 8 p.m. on Wednesday, March 13, 2013, in the Johnson-Danielson Funeral Home, 1100 North Michigan Street, Plymouth.
Funeral services for Mary will be held at 11 a.m. on Thursday, March 14, 2013, in the funeral home with Rev. Mark Need, Pastor of Trinity United Methodist Church officiating.
Interment will follow in New Oakhill Cemetery.
Memorial contributions in Mary’s name may be made to the Center for Hospice Care, 112 S. Center St., Plymouth, IN 46563, the Plymouth High School Athletic Department, 1 Big Red Dr., Plymouth, IN 46563 and the Trinity United Church, 425 S. Michigan St., Plymouth, IN 46563