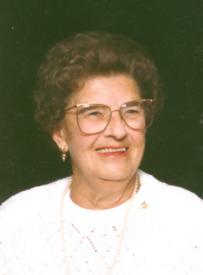 A graveside memorial service for Mary E. Smith Welch, 93, who passed away on October 10, 2007 will be held at 2 p.m. Saturday, July 12th in the Sandridge Cemetery. The cemetery is located Northeast of Bourbon on 8th Road.
Mary was born the daughter of Roy and LaVerna (Faulkner) Jackson, in Bourbon, Indiana. She was married to Wayne Smith, after his passing she then married Eugene Welch in Dec. 1951 in South Bend, Indiana; who also preceded her in death. Mary graduated from Bourbon High School with the class of 1932, she then attended business school. She worked as a Cost Accountant for Merck, Sharp & Dohme in Chicago, Illinois for 10 years until her retirement in 1980. After her retirement she and Eugene moved to Bourbon.
She is survived by two brothers and a sister they are John V. and Opal Jackson of Naples, Florida, and Robert “Dale” & Shirley Jackson of Bourbon and Ruth Ellen Alderfer of Lafayette, two nieces and five nephews survive as well
Mary was preceded in death by her parents, brothers Clarence and Wayne, a sister and brother in law Velma and Glen Emerick, and a nephew Randy.