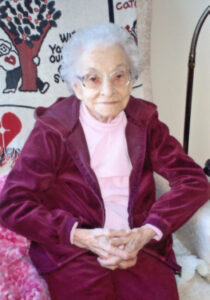 Mary Welborn Burkett, 105, died of natural causes on Wednesday morning, August 29th, 2012, in the Catherine Kasper Life Center.
A lifelong resident of Marshall County, Mary was born on August 18, 1907 and raised on that same farm in West Township. She was the daughter of Ray and Elma (Thompson) Welborn.
She graduated from the old Washington Elementary School and was in the first graduating class from Lincoln High School in 1925. An honor student, after high school she graduated from the South Bend Business College
She remembered being courted by her high school sweetheart, Floyd E. Burkett, who she married on June 28, 1930.
Mary worked for the United Telephone Company, first in the traffic department and later in the commercial office for 23 ½ years, retiring in 1969. She also worked as the secretary for Florence Riddick Boys, a state probation officer. Always busy, she worked part time in voter registration in the County Clerk’s office.
She loved to travel and the Burketts traveled a great deal, spending their winters in Texas, and, later, in Florida and many summers in Canada.
After she broke her hip in 2006, she moved to the Catherine Kasper Life Center.
“People are so good to me,” she said in a 2007 interview. “I have had a good life.”
Mary is survived by her two daughters: Joyce E. Howard of Plymouth, and Carol A. (Magoon) Blane and spouse Markham of Indianapolis. Seven grandchildren: Deborah L. (Kurt) Caudell of Bedford, IN, Susan H. (John) Wendel of Plymouth, Julie A. (Alain) Desaulniers of Ontario, Canada, Bonnie J. Helton of Indianapolis, Maggie e. (Robert Roe) Magoon of Mt. Pleasant, Michigan, Ryan R. Magoon and Andrew A. (Mei) Magoon of VanCouver, BC. Eleven great-grandchildren and one great-great granddaughter, also survive.
Mary was preceded in death by her husband: Floyd, her beloved husband of 71 years who died in 2001, and two sisters Florence Thomas and Katherine Barkey.
She was an active and devoted member of the Church of the Brethren, the Loyal Builders Class and the Ladies Aide.
The family will receive friends from 5 to 7 p.m. on Tuesday, September 4, 2012, in the Johnson-Danielson Funeral Home, 1100 North Michigan St., Plymouth.
Services for Mary will be held on Wednesday, September 5, 2012, at 11 o’clock in the Plymouth Church of the Brethren, 1130 N. Michigan St. Pastor Ruth Yoder will officiate. Calling will continue in the church one hour prior to services.
Interment will be in the New Oakhill Cemetery, Plymouth.
Memorials in Mary’s memory may be made to the Plymouth Church of the Brethren, 1130 N. Michigan St., Plymouth, IN 46563, Catherine Kasper Life Center, P.O. Box 1 Union Road, Donaldson, IN 46513 or The Center for Hospice Care, 112 S. Center St., Plymouth, IN 46563.