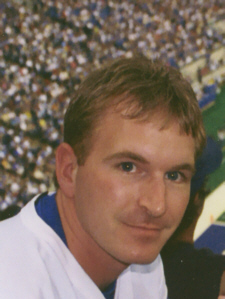 Matthew T. “Matt” Durbin died unexpectedly at his home, 14464 7 B Road at 2:41 a.m. on Friday, December 8, 2006.
Matt was thirty-three years young.
A devoted husband and father, a loving son and caring brother, Matt was a friend to all who knew him. As a father and husband, he enhanced family memories through his actions and by his being a positive role model . He was always very proud of his family’s accomplishments.
He was born on Christmas Eve, 1972, in West Point, New York. The son of Dr. John Paul and Joan E. Ford Durbin.
He attended St. Mary’s Catholic School grades K-6. He graduated from Yorktown High School with the class of 1991, attended Wabash College, and graduated from Ball State University, Muncie, IN, May (1998) with a B.S. degree in Biology. He was a member of Phi Delta Theta fraternity.
On July 18, 1998, in Las Vegas, Nevada, at the Riviera Royale Wedding Chapel, Matt took Gina L. Weidner as his bride.
He was employed with U.S. Granules, Plymouth, IN as a lab technician for seven years testing aluminum. He had also worked at Radio Shack in Plymouth.
Matt was a family oriented person who enjoyed and looked forward to sharing holidays and family events. He loved the family vacations at Lake James, Angola, Indiana, where the activities included boating, fishing and swimming. In the evenings, he and his family enjoyed the sunsets and the meals he would cook on the grill. He also enjoyed the trips he and his wife took to Las Vegas, Nevada, creating many happy, lasting memories.
As a sports enthusiast, Matt enjoyed indoor and outdoor sporting events. When the Colts played at home, Matt would be in the stands with a friend or family member. His opinion of the team was “It just doesn’t get any better than this.”
Matt had a keen interest in technology and he would explore all avenues to complete the challenges of the tasks presented. Success was his goal and accomplishment.
Matt is survived by his wife and by their two sons and a daughter. His sons are John David Patrick and Hunter Matthew Thayer Durbin. His daughter is Alexandra Anne Sivak Durbin, all of Plymouth.
His parents, Dr. John Paul and Barbara Durbin, Yorktown, Indiana, and Joan Durbin, Indianapolis, Indiana, also survive, together with four brothers and their families. They are: John Paul III and Holly Durbin and their children, John Paul IV, Jake and Caroline, Indianapolis, Indiana: Mark B. Durbin, M.D. and Stacy, Ft. Collins, Colorado, and their children: Baxter, Elle, Cameron and Charlie Ann: Douglas and Christina Durbin and their son, Drake, and David Durbin, all of Indianapolis, Indiana.
Matt’s maternal grandmother, Elaine Ford of Indianapolis and his Godfather, T.J. Anthony of Japan also survive.
Other survivors are: father-in-law, Glenn A. Weidner, Plymouth and Glenn A. Weidner II, brother-in-law, San Francisco, California.
He was preceded in death by maternal grandfather, John A. Ford, and maternal grandparents, John Paul and Anne Sivak Durbin.
Friends are invited to celebrate the life of Matthew Durbin with his family from 3 to 8 p.m. on Tuesday, December 12, 2006, at the Johnson-Danielson Funeral Home, 1100 N. Michigan Street, Plymouth, Indiana. Visitation will also be available after 7 a.m. on Wednesday, December 13, 2006, at the funeral home.
The Mass of Christian Burial for Matt will be held at 11 a.m. on Wednesday, December 13, 2006, in St. Michael’s Roman Catholic Church, where Matt was a member, 612 N. Walnut St., Plymouth. The Rev. Father William Kummer will officiate.
Interment will be in St. Michael’s Catholic Cemetery.
Matt was a kind, caring, loving, and sharing, person who will be missed by all. Matt, our love extends to you and you will always be in our thoughts, memories, and prayers.
Memorial gifts in Matt’s memory may be made to the Plymouth Public Library’s Children’s Reading Program.