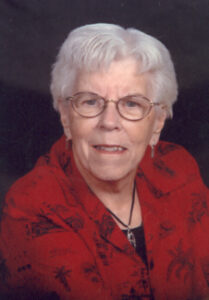 Lifetime Tyner area resident, Mavis (Mrs. Cedric) Shank, 93, passed away following an illness at 2:40 p.m. Wed. July 4th, at the home of her daughter in New Albany, Indiana.
Mavis was born the daughter of Arbie and Eva R. (Sheaks) Reid on the family farm in Polk Township on March 19, 1919 and for most of her life never lived more than two miles from home.
On August 30, 1941 in the Tyner United Brethren Church, she married Cedric E. “Keck” Shank. During their nearly 59 years together they raised two children, enjoyed their church and traveled spending time in Florida. He preceded her in death on February 1, 2000.
In the mid 1950’s, Mavis became the assistant to the principal at Tyner School, which made her head cook and chief bottle washer. She did it all. She remained with the system as it became John Glenn and retired in 1984 as corporation treasurer after 28 years.
She loved her church and the Tyner Community and they loved her noodles. She was the ‘Noodle Lady” for the church annual Chicken & Noodle Dinner. And when she could no longer actually do the job she would oversee it as she held on to an 80 year plus involvement in what is now Tyner United Methodist Church. Mavis was a caregiver by heart and often visited those who were shut-in.
Mavis was a former member of the Tyner Rebekah Lodge and Marshall County Choir. She enjoyed shuffleboard and word puzzles.
She is survived by her son Gary E. and Marilyn Shank of South Bend and their children; Deanna Shank, Jeff Nowakowski and Jason Shank. Her daughter who survives is Linda E. Underwood of New Albany and her children; Michelle (Mrs. Brian) Hancock and Melissa (Mrs. Paul) Goodlett. There are five great-grandchildren who survive. They are: Ryan, Megan, Drew, Noah and Melissa. Mavis has a sister, Irma Shultz of Indian Land, South Carolina.
Preceding her in death was her spouse Keck, a great-grandson Luke Anthony Hancock and four brothers; Ora, Earl, Harry, and Lee Reid.
Visitation will be held on Sunday, July 8th from 2 – 6 p.m. in the Johnson-Danielson Funeral Home, 1100 N. Michigan St., Plymouth. Services will be held at 11 a.m. Monday, July 9th in the Tyner United Methodist Church where visitation will continue after 10 a.m. Pastor Tamara Boggs and former pastor, Rev. Dave Inskeep will officiate. Burial will follow in the Tyner Cemetery. Memorial gifts may be made to the church.