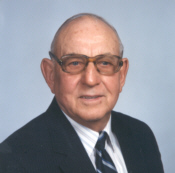 Max E. Ottow, 87, 7879 Johnson St., Donaldson, Ind., died of natural causes in Pilgrim Manor, Plymouth, at 8:50 a.m. on Friday, October 10, 2003.
Born in Knox, Ind., on July 26, 1916, Max was the son of Max C. and Maude A. Hapner Ottow. Max served on the U.S.S. Sarah Seas in the United States Navy during W.W. II.
On April 19, 1937, he and Beatrice L. Bollman were married in Plymouth. Beatrice died on October, 17, 2000.
Max owned the Phillips 66 station in Donaldson at one time, and, as an operating engineer worked for McMann, Reith Riley and Dyer Construction companies. He was a member of the Local Union 150 for 62 years.
He loved to travel: he and his wife wintered in Fla., Texas and Ariz. for 26 years. He enjoyed working outdoors, doing gardening and liked to work with his hands, doing mechanic work. He attended Pretty Lake Trinity Methodist Church, Plymouth.
Max is survived by two daughters, Alice and Samuel Johnson and Melenie and Jack Flosenzier, all of Plymouth. He is survived by six grandchildren, Renea and Terry Beldon, Plymouth, Robbin Johnson and Todd Johnson, Culver, Indiana, Vonnie Bigley, Plymouth, Clayton and Vickie Flosenzier, Plymouth and DeVon Flosenzier of Plymouth. Also surviving are ten great grandchildren and one great-great granddaughter. A brother and sister-in-law, Charles and Velma Ottow, also of Plymouth, survive as well.
Max was preceded in death by his parents, his wife, two infant daughters and several siblings: Berthana Collins and Eleanora Metzcus, Cecil Ottow.
Friends may call at the Johnson-Danielson Funeral Home, 1100 N. Michigan St., Plymouth, from 3 to 7 p.m. on Sunday, October 12, 2003.
Funeral services for Max will be held at 10:30 a.m. on Monday, October 13, 2003, in the Johnson–Danielson Funeral Home, Plymouth. The Rev. Leonard Jackson will officiate.
Interment will be in New Oakhill Cemetery, Plymouth.
Memorial gifts in Max’s memory may be made to Marshall Co. Hospice, Pretty Lake Trinity Methodist Church or the charity of the donor’s choice.