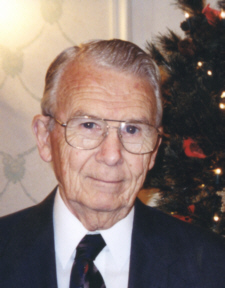 Max E. Tharp has been called upon once again to serve. Max, 84, died unexpectedly of natural causes, at his home, 120 Elliott Ave., Plymouth, at 12:29 a.m. on Thursday, August 16, 2007.
When Max is remembered, people will speak of his hard work, compassion and dedication to his church, family, country and community. He shared a masterful talent in funeral service that spanned 60 years.
Max was born in Bourbon, Indiana, the son of Marvin R. and Mary Spencer Tharp, on December 27, 1922. At home he worked in the family creamery. He graduated from West High School with the class of 1940.
Max served his country in the United States Army in World War II stationed in Northern France from 1943 – 46. Upon his return he began working at the Johnson & Son Funeral Home with Ralph Johnson and Max’s brother-in-law, Francis Johnson. On February 1, 1948, in Plymouth, Max and Marian L. Walterhouse were married. He then pursued his career in funeral service and graduated from the Indiana College of Mortuary Science in 1949 and received his Embalmer/Funeral Director’s license. Max had a gift of remembering the events of nearly every funeral service and family. He continued to serve as a consultant for the funeral home as recent as this past Tuesday.
Work was his life hobby, yet in his later years, he enjoyed the many activities of his grandchildren.
A long time member of the Trinity United Methodist Church, the Plymouth Lions Club, and the V.F.W. Post 1162, he was also a Republican precinct committeeman and served on the Center Township Advisory Board for a number of years.
Max is survived by Marian, his wife of 59 years, and by their children, two sons and a daughter.
His children are Jack A. and Pamela Tharp, Noblesville, Ind.; James R. and Karen K. Tharp, Speedway, Ind., and Jill L. Tharp, Indianapolis, Ind.
Five grandchildren also survive, they are; Zachary Tharp, Amber (Doug) Doster, Rachel Tharp, Leah Tharp and Lorian Tharp. A great grandson includes Jack William Doster.
A sister, June Gilligan of Banner Elk, North Carolina, and several nieces and nephews also survive.
Max was preceded in death by his parents, a sister; Martha E. Johnson, and a brother; Robert S. Tharp.
Friends are invited to share memories and celebrate the life of Max Tharp from 3 to 7 p.m. on Saturday, August 18, 2007, in the Johnson-Danielson Funeral Home, 1100 N. Michigan St., Plymouth.
Funeral services will be held at 2 p.m. on Sunday, August 19, 2007, in the Trinity United Methodist Church, 425 S. Michigan St., where friends may call one hour prior to services. The Rev. William Kaster, pastor of the church, will officiate.
Burial will follow in New Oakhill Cemetery, Plymouth with Military Honors accorded him by the Veterans of Foreign Wars Post 1162 and American Legion Post 27.
Memorial gifts in Max’s memory may be given to the Trinity United Methodist Church.