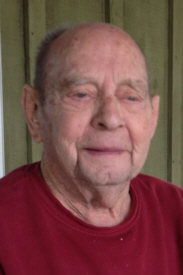 On April 4, 2015, his 91st birthday, Max W. McNear, our dad, has passed peacefully into Heaven. Max passed away at 6:20 a.m. in the Catherine Kasper Life Center, Donaldson, following a brief illness.
Max Wayne McNear, the son of Benjamin and Lela (Deal) McNear, was born on April 4, 1924 in Manchester, IN. He served in the U.S. Navy during WWII from 1943 until his Honorable Discharge in 1946.
On November 5, 1949, he and Ruth Mae McColley were married. On December 29, 2007, Ruth would precede him in death.
They moved to Plymouth in 1964, where Max was the Jewel Tea Route Salesman for Marshall County. After retiring, he and Ruth operated the Old Dutch Dairy at the corner of Jefferson and Michigan St. for many years. He also worked at Kabelin Hardware.
Max lived for the game of Euchre and played two times a week at the Life Enrichment Center. He was an avid fisherman, played golf in his younger years and enjoyed exercising at the Life Plex Center, usually four mornings a week.
Max is survived by a daughter, Cindy (Bruce) Burkart of South Bend; a son, Michael McNear of Plymouth, five grandchildren, eight great grandchildren and a sister, Bette Baldwin of Melborne, Florida.
He was preceded in death by his parents; his wife, Ruth; one brother, Thurston McNear and three sisters: Rachel McNear, Lois Canright and Grace Reddich.
Visitation will on Wednesday, April 8, 2015 from 4 to 6 p.m. in the Johnson-Danielson Funeral Home, 1100 N. Michigan Street, Plymouth.
Funeral services, officiated by the Rev. Larry Marhanka, pastor of the First United Methodist Church, will be in the funeral home following visitation at 6:00 p.m. Family burial will be in the New Oakhill Cemetery with Military Honors provided by members of the American Legion Post 27, Veterans of Foreign Wars-Marshal County post 1162 and the D.A.V.
Memorial contributions may be made to the Life Enrichment Center, 1305 W. Harrison St., Plymouth, IN.