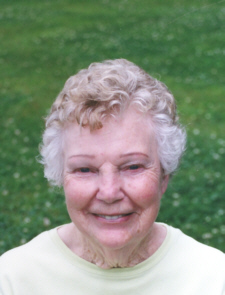 Beulah Maxine Severns – Myers, 88 died at 9:34 am on Monday January 25, 2010 at St. Joseph Regional Medical Center, Plymouth, Indiana.
Born on July 20, 1921, Maxine was the daughter of Thomas and Pearl Shoemaker Boyer.
She graduated from Akron High School with the class of 1939.
In 1939, she and Herbert D. Severns were married and moved to South Bend. Herbert died of Leukemia in 1955 while employed with the South Bend Police Department..
Eleven years after Herbert’s death, on August 27, 1966, Maxine and A. Eldon Myers were married and moved to a farm east of Plymouth, Eldon passed away in 1993.
Maxine was a member of the F.O.P. Auxiliary, the Moose, Eastern Star and North Central Cattleman’s Association.
Maxine was a caring and loving mother and a proud grandmother, she enjoyed square dancing and working on the farm and in the yard.
She is survived by three children: Sandra (Terry) Krantz, Phoenix, AZ., Dennis (Jeannie) Severns, Merritt Island, FL., and Frederick Severns, West Palm Beach, Fl.
Three step-children survive as well. They are Ellen (Jerry) Hummel, Walkerton, Tom (Kris) Myers, Plymouth and Nancy Myers, South Bend.
She is also survived by four grandchildren, four step-grandchildren, and four great-grandchildren. They are grandchildren Shelly (Jack) Paul, Phoenix, AZ; Capt. Denise Severns Fort Carson, Colorado Springs, Colorado; Bryant Severns, Merritt Island, Florida; Chris (Erin) Severns, Indianapolis, Indiana; Amanda (Brian) Bettag, Lafayette, IN, Betsy (Nick) Loeks, Kalamazoo, MI; Daniel Hummel, Walkerton, IN; Courtney Myers, Chicago, IL; and Libby (Tim Keogh) Scott, Lawerence, KS. The four great grandchildren are Camden Bettag, Brody Bettag, Rhea Scott, and Kansey Keogh. Also surviving are two nieces Claudia Bailey and Sharon Sipes, and former daughter-in-law and good friend Kathy Karczewski.
Maxine was preceded in death by her two husbands Herbert and Eldon, her parents, two sisters; Willodean Myers, Ethel Boyer and three brothers; Arthur Boyer, Everett Boyer, and David Boyer.
A grandson Corporal Scott Severns an officer with the South Bend Police Department has also preceded Maxine in death. He lost his life during a failed robbery attempt on April 23, 2006.
Friends are invited to share their memories of Maxine with her family on Thursday, January 28, 2010, from 4 to 8 p.m. at the Johnson-Danielson Funeral Home, 1100 N. Michigan St., Plymouth. Funeral services for Maxine will be at 11 a.m. on Friday, January 29, 2010 in the funeral home. The Reverend Mike Dixon, pastor of Tyner United Methodist Church will officiate.
Burial will be in the St. Joe Valley Cemetery in South Bend.
Memorial gifts in Maxine’s memory may be made to the Scott Severns’ Memorial Fund, in care of: Police Credit Union, 1130 S. Main St., South Bend, Indiana 46601