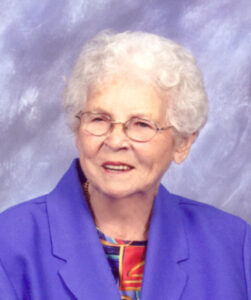 Maxine M. Berrier, 90, died March 22, 2009 at 1:15 a.m. in St. Joseph Regional Medical Center, South Bend.
She was the born May 5, 1918 the daughter of John E. and Clara A. Stark Davis in Fairmont, Indiana.
Maxine graduated from Grant County High School in Matthews, Indiana with the class of 1936.
June 22, 1937 she married G. Matthew Berrier in Marion, Indiana; he preceded her in death on August 11, 1995.
Leaving Hartford City they moved to Plymouth in 1942. Maxine worked at the Marshall County Bank which was later known as First Source Bank, she worked for them 19 years until her retirement in 1980.
She was a member of the Plymouth Wesleyan Church, the Women’s Connection Club, and the Women’s Missionary Club. Maxine also enjoyed volunteering at the Historical Museum, crocheting, word search puzzles, and her grandchildren.
She is survived by two sons Gilbert Eugene & Dorothy Berrier of Bremen, IN; and Jack Lee and Jan Berrier of Lakeville, IN. Four grandchildren Steven & Robin Berrier Roanoke, IN; Wayne & Nancy LaFlash, Bremen, IN; Christopher Berrier, Lakeville, IN; and Luke Berrier, Indianapolis, IN survive as well along with four great grandchildren and one great great grandchild.
Maxine was preceded in death by her husband, her parents, five sisters, Dorothy Miller, Edith Painter, Kathryn Wilson, Ruth Middleton, and Mary Veazey, along with five brothers, Charles Davis, Elby Davis, John Davis, and Kenneth Davis.
Friends are invited to share their memories with Maxine’s family from 5 to 8 p.m. on Wednesday, March 25, 2009, at the Johnson-Danielson Funeral Home 1100 N. Michigan Street, Plymouth. Calling will continue one hour prior to the service at the church.
Funeral services will be held on Thursday, March 26, 2009 at 11 a.m. in the Plymouth Wesleyan Church, 11203 S. Michigan, Plymouth. Pastor John Branch will officiate. Interment will be in the New Oakhill Cemetery, Plymouth.
Memorial contributions in Maxine’s name may be given to the Plymouth Wesleyan Church Building Fund.
.