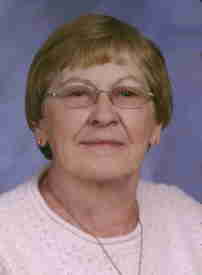 Media Klingerman, 76, of 7th Rd in Plymouth, passed away after a lengthy illness at 4:52 p.m. on Thursday, September 19, 2013 in St. Joseph’s Regional Medical Center, Plymouth.
Born on May 11, 1937 in Decoy, Kentucky, she was the daughter of Buck and Ellen (Shepherd) Stacy. She attended Berea College in Kentucky.
In Las Vegas, Media married Chester Earl “Skip” Klingerman in May of 1984.
Media worked as a nurse’s aide at the former Parkview Hospital in Plymouth. But most of her time was spent being surrounded by her family and taking care of her children. She was a member of the First Baptist Church in Bremen, Indiana.
Media enjoyed gardening, feeding and watching the hummingbirds that flew to her house, was a doll collector, and loved spending all the time she had with her family and grandchildren.
Media is survived by her husband, Chester “Skip” of Plymouth, and their children: Larry B. Haddix of Plymouth, Carol A. Haddix of Plymouth, Frances L. Werb of Plymouth, Paula J. (Pat) Haddix-Henderson-Hinshaw of Goshen, Brian E. (Joyce) Klingerman of Bremen, Beth D. Klingerman of South Bend, Karen (David) Oberly of Bremen, and Kristy (Steven) Burkins of Bremen.
Her grandchildren are: Chad Haddix, Brandon Haddix, Brian Haddix, Daniel Henderson, Gary Werb, Eric Henderson, Karla Haddix, Katie Haddix, Garrett Haddix, Rebecca Crow, Jessica Klingerman, Brandy Klingerman, Doug Klingerman, Justin Klingerman, Preston Oberly, Taylor Oberly, Levi Burkins, Andrea Burkins, Haley Burkins and Jackson Burkins. She has 14 great-grandchildren: Jessica Edwards, Logan Henderson, Alena Werb, Sandra Felix, Olivia Henderson, Piper Haddix, Jayden Werb, Quinn Haddix, Hala Haddix, Brantley Henderson and Evolette Williams. Her sisters are Doris (Bill) McKinney of Florida, Frances A. Shock of Knox, Freida (Troy) Bailey of North Judson, IN, and Glenna (Doug) Bunton on Plymouth.
She was preceded in death by her parents; son, Silas D. Haddix Jr.; sisters, Georgia Stacy and Dallas Smith; and her brothers, Dexter, Aaron and Arnold Stacy.
Visitation will be from 4 -7 PM on Monday, September 23, 2013 in the Johnson-Danielson Funeral Home, 1100 N. Michigan Street, Plymouth.
Funeral Services will be at 11 AM on Tuesday, September 24, 2013 in the Plymouth Wesleyan Church, 11203 S. Michigan Road, Plymouth, Indiana 46563.
Burial will be in the New Oakhill Cemetery, Plymouth.
Memorial contributions can be made to Riley Children’s Hospital, 705 Riley Hospital Dr. Indianapolis, IN 46202 or to the donor’s choice.