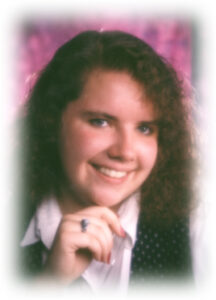 Melinda A. “Mindy” Pregel, 31, A Crawfordsville, Ind. resident since 1999, formerly of Mishawaka, Ind., died of natural causes in Saint Joseph Regional Medical Center, Plymouth, at 10:03 p.m. on Monday, July 16, 2007.
Born in South Bend on April 14, 1976, Mindy was the daughter of Dennis A. and Pat S. Getty Pregel.
She was a 1994 graduate of Mishawaka High School and a 1999 Purdue University graduate.
She worked as the Quality Assurance Manager of Harlan Bakeries in Avon, Ind.
A member of the Purdue University marching band for four years, Mindy played the Saxophone and Clarinet. She organized the Relay for Life in Crawfordsville.
She enjoyed cooking, crafts and instituting home improvements. She was an extensive traveler throughout the United States as well as abroad.
Mindy is survived by her parents, Dennis and Pat, Plymouth, and by her maternal grandmother, Betty Getty of Bettendorf, Iowa.
Two uncles and aunts-in-law, Terry and Sharon Getty of Bettendorf, Iowa; Clifford and Bettie Getty, of Blue Grass, Iowa, and four cousins, also survive.
She was preceded in death by Charles and Erma Pregel, her paternal grandparents, her maternal grandfather, George Getty and a half-brother, Tommy Schenkel.
Friends are invited to share happy memories and celebrate Mindy’s life on Thursday, July 19, 2007, from 5 to 7 p.m. and on Friday after 7:00 a.m. in the Johnson-Danielson Funeral Home, 1100 N. Michigan St., Plymouth, Ind.
Funeral services for Mindy will be held at 10:30 a.m. on Friday, July 20, 2007, in the funeral home. The Rev. Michael P. Dixon, pastor of the Tyner United Methodist Church, will officiate.
Burial will be at 2:00 p.m. on Friday in Fairview Cemetery, Mishawaka, Indiana.
Memorial gifts in Mindy’s memory may be made to the Purdue Marching Band or Relay for Life.